Analysis of tissue samples from prehistoric feathers and bone preserved for over 150 million years have confirmed the link between dinosaurs and modern birds, say scientists.

A team led by geochemist Roy Wogelius from the University of Manchester in the UK used a sensitive high speed imaging technique to analyse remains of arguably the best fossilised specimen of Archaeopteryx - the earliest and most primitive bird known to have reptilian and avian characteristics.

The team carried out chemical analysis using synchrotron rapid scanning x-ray fluorescence (SRS-XRF) - electromagnetic radiation that probes and identifies the chemical structure of matter at very low concentrations - to analyse one of a number of fossilised Archaeopteryx specimens discovered in Germany, and found that structures believed to be impressions of feathers and bones were in fact remains of the prehistoric creature. 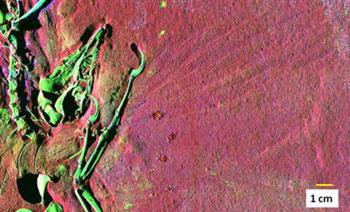 The team also indentified traces of zinc and copper in preserved bone. ’We have learnt that the original chemistry of Archaeopteryx and its macronutrient needs in terms of copper and zinc are very similar to that of common birds,’ says Wogelius. ’This establishes a nice chemical link between those biological entities which is fascinating.’

Other methods to analyse fossil specimens such as x-ray fluorescence and electron microscopy can only analyse samples on microscope slide scale and therefore to study Archaeopteryx by these methods, it would have to be destroyed. Breaking up the specimen was not an option, says Wogelius.

’The paper pioneers a new method that offers high-magnification views of fossils, and finely detailed chemical analysis,’ says Mike Benton, professor of vertebrate palaeontology at the University of Bristol, UK. ’This offers further improvements in many of the widely used techniques for imaging fossils and mapping elemental abundances as a way of interpreting the mode of preservation, especially of soft tissues.’

Wogelius and his team believe that the synchrotron imaging technique will be invaluable when analysing other specimens. ’The Archaeopteryx is very important and that’s why we studied it first,’ Wogelius explains. ’The development of this technology will make a big impact on what is possible for palaeontologists to do,’ he adds.