Too big and macromolecules like proteins and DNA have to travel too far, too small and they’re too crowded

A US team has suggested molecular movement as an answer to the question of why cells are the size they are. A question that they say ‘still awaits an answer from first principles’.

‘Biologists say cells should be small to maximise the surface area to volume ratio and the traffic through the membrane,’ Bartosz Grzybowski from Northwestern University in Evanston, Illinois tells Chemistry World. ‘In that case cells should be infinitesimally small.’ So just why are cells the size they are?

To work properly, cells need macromolecules like proteins and nucleic acids. Prokaryotes, such as bacteria, contain around 3 million macromolecules while more complex eukaryote organisms contain  around 8 billion. Giving these molecules enough room to move would clearly limit what cell sizes might be. ‘If you’re a factory operating in a building that is too small, the machinery is very crowded,’ Grzybowski says. ‘If it’s too large and one machine is far apart from the others that would also not be good for the assembly line.’ 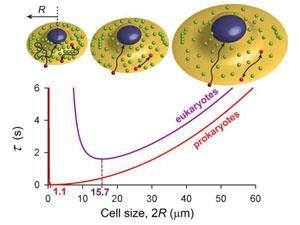 Microscopic cells get their size just right for chemical transport

To study the relationship, Grzybowski’s team investigated the passive transport of molecules in cells through two different approaches. They used both the Einstein-Stokes equation and obstruction theory to calculate diffusion coefficients, which depend on the size of the molecules and crowding in the cells. From this they could work out transport times in different cell sizes, finding optimum values near the actual diameters of 1µm for prokaryotes, and 10µm for eukaryotes. ‘We’ve proven that this is irrespective of the model we’re using,’ Grzybowski says. ‘It’s something universal about the optimisation system of nature.’

University of Bristol’s Stephen Mann, who has developed a  model protocell system, calls the work ‘insightful but obvious’, adding that it raises lots of questions. ‘The core argument is about passive diffusion and its relationship to molecular crowding and cell size,’ he says. ‘But what about temperature? For example, are thermophiles statistically larger than cold-loving bacteria due to changes in the diffusion coefficient?’

Grzybowski hopes that the size insight will help his team produce dynamic chemical systems that resemble cells, but that differ in biology, from first principles . ‘We have been most interested in the reaction part,’ he says. ‘But if you really want to build a molecular assembly line – something that works on the right timescale – you need to think about the interplay between reaction and delivery. Biologists don’t think about cells in this way. It’s about time we start thinking about cells in terms of physics and thermodynamics.’