New strain of E. coli uses alien DNA bases to the rest of life on Earth, and could improve the biosecurity of synthetic biology

European scientists have created an Escherichia coli strain with a separate genome using chlorinated DNA. The genome should be unable to transfer back into unmodified bacteria, leading to what the researchers call a ’genetic firewall’. 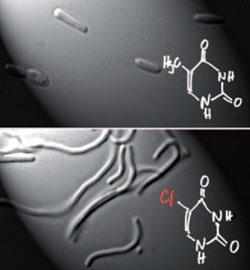 E. coli using thymine in its DNA (above) and using chlorouracil (below)

The base pairs used in DNA are so universal (A, T, G and C) that genes can hop between species all the time, especially between bacteria. Horizontal gene transfer, as it is known, is how antibiotic resistance is spread and some people are concerned that it could lead to genetically engineered DNA crossing to wild-type species.

Because this new bacterial genome uses a different set of DNA bases, if any horizontal transfer did occur, the bacteria that got the new DNA would quickly die, containing the spread, says Rupert Mutzel from the Free University of Berlin, Germany, who led the research team.

’I think the public will demand that we make synthetic biology secure,’ says Mutzel. ’And we should address this from the very beginning.’ He adds: ’Physical containment is just an illusion; we’ve seen that with Fukushima [the Japanese nuclear disaster] and the famous anthrax letters.’

Mutzel and his team used ’good old Darwin’ to speed up the evolution of E. coli until it used chlorouracil - a chlorinated analogue of the DNA base thymine (T). To replace the requirement for thymine with this new base, the team used a new device that cycled normal E. coli between alternating growth media. One growth medium contained T and one held chlorouracil. Slowly - through multiple cycles - bacteria are selected that incorporate chlorouracil and can survive without T.

So if it uses different DNA, is it even still E. coli? ’If you were a taxonomist you would say that all other organisms can be recognised as having thymine in their genome,’ says Mutzel. ’This doesn’t contain thymine so it’s like something from outer space.’

Nediljko Budisa of the Berlin Institute of technology, Germany, who has recently set up a cluster of scientists to work on synthetic bacteria, describes the approach as ’very elegantly solving the problem of gene transfer so there is no possibility of gene pollution.’

But at the moment, the bacteria aren’t completely isolated from our DNA world of A, T G and C. If the strain is given thymine it will use that instead, before happily going back to using chlorouracil when put into growth media containing that.

Creating a completely separate but parallel set of life is the next step so that the genetic firewall is truly secure and the bacteria can’t return to using thymine says Mutzel. Then his new, secure, chemically altered world can be used as biological factories for fuel and feedstock chemicals without worry. If the bacteria did get out, claims Mutzel, it would then just die because it couldn’t find any chlorouracil.