Robert Grubbs, who jointly won the 2005 chemistry Nobel prize for his work on olefin metathesis, has passed away aged 79. Grubbs received the prize for discovering how robust, air-stable metal compounds catalyse reactions that break and rearrange double bonds between carbon atoms. Since the 1990s, Grubbs’ catalysts have been a staple for synthetic organic chemists in drug discovery and fine chemicals production. 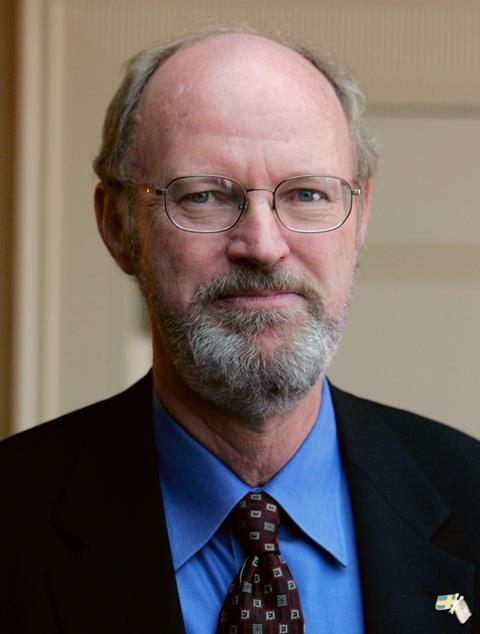 Grubbs was born in 1942 on a farm in rural Kentucky, US. In 1965, he received his Master of Science degree from the University of Florida. ‘I was an agricultural major when I went to college, but I soon discovered that organic chemistry was more fun and smelt a lot better,’ Grubbs joked in a 2018 interview with Chemistry World. His interest in the burgeoning field of organometallic chemistry was piqued when he learned about cyclobutadiene iron tricarbonyl from its discoverer, Australian chemist Rowland Pettit.

Under the supervision of Columbia University’s organic chemistry giant Ronald Breslow, Grubbs worked on cyclooctatetraene iron tricarbonyl complexes for his PhD research. It was also here that Grubbs met his future wife, special educational needs teacher Helen O’Kane, with whom he would later have three children.

In 1968, Grubbs moved on to Stanford University as a postdoctoral fellow with organometallic bioinorganic chemist Jim Collman. ‘Collman came back from a consulting trip and told us about a crazy reaction that allowed you to convert propylene into ethylene and 2-butene,’ Grubbs recalled. ‘I felt that this unknown reaction mechanism would be an ideal problem to study, kick-starting an on-and-off 50-year journey, at Michigan State University and later at Caltech, working on this transformation that we now call olefin (alkene) metathesis.’

It was around the same time as Yves Chauvin, who would later become Grubbs’ co-laureate, published a metathesis mechanism. This work inspired Grubbs to find a new catalyst for the reaction as the only ones available at the time were ill defined or unstable. In 1992, he and his team reported their first molecular ruthenium–carbene complex that could polymerise norbornene via ring-opening metathesis.

But soon the researchers realised that their catalyst not only worked in polymerisation reactions but could also coax many unreactive alkenes into metathesis. And unlike Richard Schrock’s molybdenum catalysts that were popular for the reaction at the time, Grubbs’ compounds were stable in air and water, and didn’t have the tendency to react with other functional groups attached to the alkene double bonds. ‘The environmental stability of our ruthenium catalysts paired with their functional group tolerance greatly broadened the potential applications of metathesis,’ recalled Grubbs. ‘It’s at this point that we really started to see the true potential of metathesis in organic chemistry.’

After some tweaking, the first of several generations of Grubbs catalysts was born. Realising the commercial potential of their discovery, Grubbs and his colleague Mike Giardello founded Materia in 1998. The company retained exclusive rights to manufacture many Grubbs catalysts and also went on to make metathesis-based materials. It sold its catalyst business to Umicore in 2017 and was acquired by ExxonMobil in 2021.

In 2005, Grubbs, Schrock and Chauvin shared the chemistry Nobel prize for their work on metathesis. Their work, the Nobel committee noted, had allowed chemists to think up new synthetic routes and vastly improve others – a step forward for green chemistry.

Making his chemistry green was one of Grubbs’ personal goals as he and his team kept working on new catalyst versions and more complex metathesis problems. ‘I think the whole area of cross-metathesis hasn’t yet reached its full potential,’ Grubbs said in the 2018 interview. A reaction between two unequal alkenes can produce six different products because metathesis can happen between molecules of the same or different types and each product can be one of two geometric isomers. ‘It usually just led to a big mixture,’ said Grubbs. But chemists have been working on ways to control the reaction, and there’s even a company that converts seed oil into chemicals by cross-metathesis on big scale. ‘This is a great achievement as being able to scale up any chemical reaction is vital, and particularly as many people thought early on that it wouldn’t be possible for metathesis.’

Although Grubbs’ research remained focused on ruthenium, he also developed organocatalytic methods such as a potassium tert-butoxide/hydrosilane system to remove sulfur-containing impurities from petroleum streams.

‘Bob was as widely loved as he was admired,’ said Caltech provost David Tirrell. ‘He trained an extraordinary group of younger scientists who have shaped chemistry worldwide, and he maintained a deep interest in their personal lives and professional successes.’

‘Bob was an inspiration to Caltech colleagues and to scientists around the world, for his human qualities as much as for his pathbreaking contributions to research and society,’ added Caltech president Thomas Rosenbaum. ‘We will keenly miss his wisdom and vision.’

Correction: On 6 January 2022 the article was updated as Grubbs’ wife is a special educational needs teacher, not a speech-language pathologist as was originally stated.