Chemists create a molecular ship in a bottle

Chemists have designed a new kind of three-dimensional molecular cage that is held together by a remarkably high number of hydrogen bonds. The structure, consisting of two types of hexagonal organic ’tile’ that self-assemble into a polyhedron, is capable of encapsulating a wide range of molecular species of varying charge and could lead to a new class of framework material.

Michael Ward’s team, from New York University in the US and the University of Milan-Bicocca in Italy, calculated that two planar hexagonal molecules of appropriately matching dimensions and with complementary hydrogen-bonding groups along the edges should have no choice but to assemble into one specific three-dimensional structure. 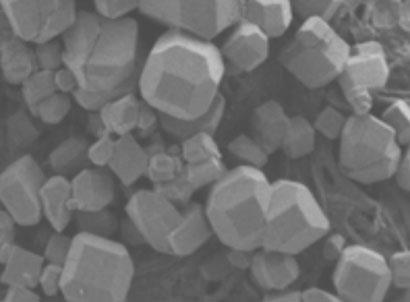 Electron micrograph of the zeolite-like framework

The first tile consists of a tris(guanidinium) nitrate cluster, and the second a hexa(4-sulfonatophenyl) benzene. When the appropriate precursors are placed in solution, four of each type of tile self-assemble through an eyebrow-raising 72 hydrogen bonds between N-H groups of one type of tile and the O-S of the other.

’We are able to combine principles of molecular symmetry with metrics to construct polyhedra based on hydrogen bonding because there is no other outcome based on symmetry,’ Ward says. ’It’s a design principle based on frustration of other possible outcomes’.

The cages, each a truncated octahedron, connect with each other to form zeolite-like crystals with each unit having an internal cavity volume of 2200?3. The team demonstrated that the cavities could host a wide range of molecular entities of varying charge, ranging from 10 negative charges to four positives. ’It is very unusual to find a framework which will accommodate both positive or negatively charged guests,’ Ward says. While some of the molecules apparently enter the cages through square channels, which are an inherent part of the geometry, others are too large and are either encapsulated during assembly of the cage or else assemble once inside - the molecular equivalent of a ship in a bottle. 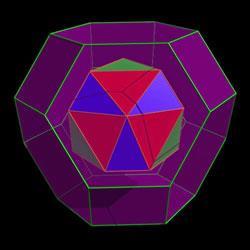 Significantly the geometry of the cages is robust - it is not influenced by the guest molecule, which is often the case for other non-covalent supramolecular structures.

Ward says: ’We may be able to create a new class of material where we can bring the synthetic versatility of organic chemistry to introduce functionality.’

’This is impressive work,’ says Scott Dalgarno, who heads the supramolecular research group at Heriot-Watt University in the UK. ’Supramolecular chemists will find this important as it extends the previous approaches to make a really elegant hydrogen-bonded system that shows real versatility in its ability to encapsulate things. It is not always straightforward to encapsulate guests and this range was diverse.’ Dalgarno adds: ’Alteration of the components will likely produce a series of stable polyhedra that will display similar stability and versatility, and will permit a range of functions.’