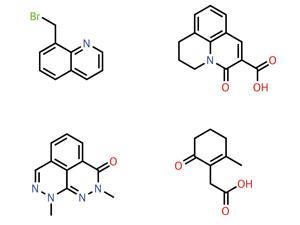 Medicinal chemists might be using far fewer parameters to choose candidate fragments for a screening collection than they think they do. Their choices can be mimicked based on just one or two properties, a team led by researchers at Swiss-headquarted pharmaceutical firm Novartis has found. And though the 19 chemists disagree widely over which fragments are desirable or undesirable, they appeared to use similar parameters for their choices. ‘This could simplify the process of creating collections of fragments in future,’ says senior author Natasja Brooijmans, now at Blueprint Medicines in Cambridge, Massachusetts.

Initially, Novartis wanted to create a collection of fragments with molecular weights below 300 to screen for drug activity against biological targets. To do this, it asked its employees for volunteers to review a collection of around 3700 candidates. 19 chemists responded, from three sites in Basel, Switzerland, Cambridge, Massachusetts, and Emeryville, California. The chemists then picked fragments that they would be willing to follow up if they were hits in a screening campaign.

That process took many hours, so Brooijmans and her former Novartis colleagues wanted to know if chemists' choices regarding desirable and undesirable fragments were predictable. ‘If they were, then we could apply that knowledge rather than asking chemists to look through thousands of molecules,’ she explains. So, the Novartis team analysed the reviewers’ choices and asked them how they thought they had made their decisions.

The reviewers disagreed widely over what should be in the screening collection, with different chemists giving the OK to 7–97% of the set, picking 45% on average. For their analysis Brooijmans and her colleagues defined consensus as just three-quarters of the reviewing chemists agreeing, which was only achieved for 8% of the whole set. Within that, just 1% was agreement to follow up and the other 7% were rejected.

The Novartis team then reproduced each chemist’s decisions using two different algorithms. Both algorithms could choose from 10 different fragment parameters, relating to their structure or physical properties. Typically the algorithms could reproduce each individual’s choices using just one or two of the parameters, while the chemists reported using between six and 10 of them.

Cognitive psychologist John Coley at Northeastern University in Boston, Massachusetts, who worked with the Novartis researchers, underlined that the difference between what chemists report they’re doing and their apparent behaviour isn’t necessarily a bad thing. ‘To me that suggests that years of experience and expertise have led to the development of “intuition” amongst these chemists,’ he says. ‘Hopefully this can make chemists aware of how they’re thinking,’ Brooijmans adds.

Chris Lipinski, who developed the ‘Rule of five’ for drug-like molecular properties, says this study is the first he’s seen looking at how people select low molecular-weight fragments. He notes that the level of agreement might have been better if the questions were posed as a two-step process. ‘The first question is: "Do you see any possible concern in this molecule?"’ he says. ‘The second is: "If there is a concern, are you optimistic about fixing it?" Then you get much better concordance among medicinal chemists.’

Derek Lowe, a medicinal chemist and columnist for Chemistry World, has noticed similar simplified selection processes and differences in opinion in his career. He also says that 3700 compounds is a ‘small-to-medium’ size collection for fragment-based drug discovery and that the 7% of ‘bad’ compounds is in the range he’d want to weed out from it. ‘This paper confirms my intuition about chemists' intuition,’ Lowe adds. ‘We're a diverse and opinionated bunch and getting us to agree on things – or agree on why we disagree – is not easy.’