Chemical 'tiles' could snap together to make football-like shell

Scientists have made molecular ’tiles’ that stick together, mimicking the football-like outer shell of a virus. Such self-assembling molecular capsules would be big enough to hold drug molecules and could provide new ways to make nanoparticles.

The molecules were designed by scientists working at the Scripps Research Institute in La Jolla, California and at the Technion-Israel Institute of Technology in Haifa, Israel. They were inspired by capsids - the hollow outer shells of viruses - which are made up of identical protein units that stick together to make a sphere.

’In nature, there is only really one economical way to make balls,’ explained Ehud Keinan, who led the research in Israel. ’Nature takes repeated tiles with icosahedral symmetry - using pentagons just like a soccer ball. We designed pentagonal tiles that can bind to one another, self-assembling to form a hollow sphere.’

The team first made 12 pentagonal plastic tiles containing small magnets and found that by shaking them together in a tube, they would spontaneously snap together to make stable closed shell - showing that this sort of self-assembly is not unique to viruses.

The researchers then searched for a suitable starting molecule that was curved, strong and also had five-fold symmetry. They chose corrannulene, C20H10, which is nicknamed ’buckybowl’, and extended the structure so that it could bind to itself under specific conditions.

The team examined three different binding mechanisms for linking the tiles together - hydrogen bonding, metal binding and forming sulphide bonds. They wanted balls that would also fall apart under controlled environmental conditions, allowing them to release their cargo where it is needed - carrying a toxic anti-tumour drug only to the target for example. 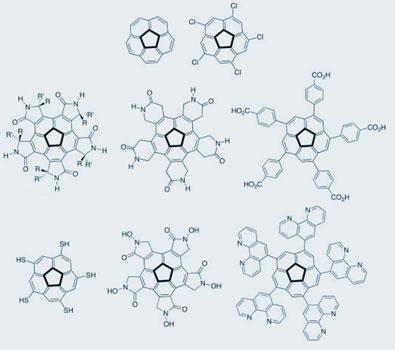 So far, the team have generated a half-sphere in the lab, but they are confident that further work will lead to an intact structure. At around 3nm wide, these balls would be larger than fullerenes, which can only hold tiny molecules up to the size of a single atom of Xenon. However, the balls would still be smaller than most viral capsids, which can be up to 30nm in size. ’We have ideas about how to increase the size in future if needed,’ said Keinan.

Jon Steed at the University of Durham has worked extensively on molecular containers. ’The design is convincing and the molecular mechanics evidence strongly suggests that these molecules may well assemble into hollow particles of useful size,’ he told Chemistry World. ’Such hollow particles are of tremendous current interest as part of the overall vision of chemical nanoscience, as potential delivery vectors for drugs and genetic information, as nanoscale reaction vessels and generally as part of "smart" molecular systems.’

But the researchers have yet to make the particles, Steed added. ’Clearly the gauntlet has been laid down to synthetic chemists to come up with a route to these potentially fascinating compounds.’