Chemists switch over to molecular computing

Paul Weiss of Pennsylvania State University and colleagues studied the switching behaviour of the molecule oligo(phenylene ethynylene) (OPE). Weiss found that OPE can adopt one of two states - one vertical, one at an angle - when it is attached to a self-assembled monolayer. The molecule can only conduct electricity efficiently when vertical, noted Weiss, but it switches between the two states at random.

He studied the difference in electrical charge between each end of the OPE molecule (the dipole). He found that if he generated a version of OPE with a large dipole, he could control the molecule’s switching behaviour with a scanning tunnelling microscope (STM). 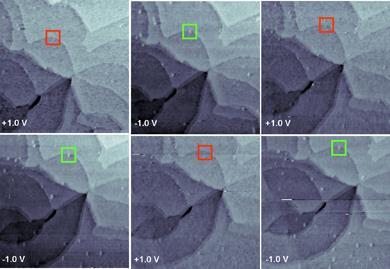 To stabilise the OPE in the off position, Weiss added amide-containing alkanethiol molecules to the self-assembled monolayer. These bonded with a nitro group on one side of the OPE when it tilted over, keeping it in the off position.

Weiss continues to work with OPE and other molecules to test further switching hypotheses. ’We are also looking at other backbones, other molecular "alligator clips" (the chemical/physical/electronic contacts to the substrate) and other substrates,’ he told Chemistry World.