Unique warped structure has properties distinct from other carbon allotropes such as graphene, fullerene and nanotubes

A new family of nanocarbons has emerged with the growth of the first non-planar nanographene. Chemists from Boston College, US, and Nagoya University, Japan successfully synthesised a grossly warped nanographene by embedding non-hexagonal rings into a nanographene subunit. The unique structure was found to have optical and electronic properties distinct from other all-carbon families. An ability to control the degree of distortion with odd-numbered rings could be a potential means of developing tailor-made graphene for future optoelectronic devices. 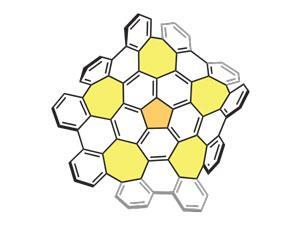 The grossly warped nanographene has interesting optical and electronic properties

Key to the formation of the grossly warped nanographene was the addition of five seven-membered rings into the hexagonal lattice by way of a previous method of building larger graphene subunits from the ground up. Thanks to earlier success with polycyclic aromatic hydrocarbons (PAHs) the team decided to likewise arylate the bowl-shaped PAH corannulene by C–H activation. Instead of stopping at the expected five-fold annulated product they found that the reaction continued all the way to the grossly warped nanographene comprising 80 carbon atoms joined together in a network of 26 rings. ‘This is purely a discovery,’ explains Japanese team leader Kenichiro Itami. ‘Initially we were not expecting that the seven-membered rings could be nicely formed under mild conditions.’ 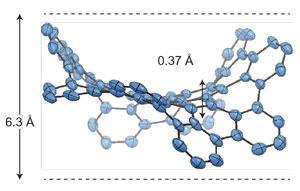 The graphene Pringle in all its glory

The double concave feature has finally brought with it a realisation of negative curvature surfaces that have long been a common feature in topological modelling. ‘The results of the experiments are in rather good agreement with the predictions,’ says David Drabold at Ohio University, US. ‘This is a fascinating piece of work in which the authors are able to directly study the influence of odd-membered rings in a small piece of amorphous graphene.’

Jay Siegel at the Univeristy of Zurich, Switzerland, agrees. ‘Bringing this to a real chemical example is remarkable given that such surfaces can be prepared from corannulene, which itself is available now in kilogram quantities,’ he says. ‘One can be confident that new electrochemical and electro-optic properties of these will become engineering materials to be exploited in OLED, solar cell or photovoltaic applications.’

Lawrence Scott from the US half of the team says that there is more to come now that they have the first warped nanographene. ‘As we learn nature’s rules about how to build seven-membered rings into these carbon lattices, we hope to design and synthesise more members of this fascinating new family of nanocarbons.’