Infant lungs are particularly prone to nanoparticle deposition, be it from pollution or inhaled medicines

Infant lungs are particularly prone to nanoparticle deposition, be it from pollution or inhaled medicines, as air flows differently inside them, say US researchers.

Lungs are incredibly complex structures, full of tiny sacs (alveoli) to increase their surface area. However, while that structure develops in the first few years after birth, the behaviour of inhaled particles in infant lungs has not been studied, until now. Akira Tsuda’s group at the Harvard School of Public Health in the US has now focused its attention away from adult lungs to look at how the air patterns in children’s lungs differ. Their findings give a clue to why children are so susceptible to air pollution and suggest that the dosages of inhaled drugs should be adjusted. 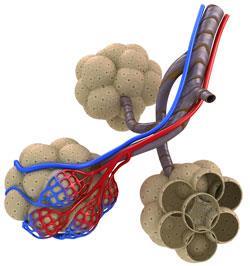 In 1995, Tsuda came up with the theory of ’chaotic mixing’ in the lungs to explain how breathed in air mixes with residual gas in the lungs, causing nanoparticle deposition in the lungs. His team found that the shape of the alveoli induces mixing but, as Tsuda explains, this is in the case of fully-developed adult lungs.1

’Human lungs are not fully developed structurally at birth,’ explains Tsuda. ’They are largely saccular without significant alveolation.’ After birth, the lungs undergo ’a dramatic structural change’ in the first few years and so, because airway geometry determines air flow and mixing, Tsuda set out to discover when chaotic mixing begins in the lungs and how that affects nanoparticle deposition.2

After computational studies suggested that chaotic mixing started as the alveoli start to form, Tsuda teamed up with Wolfgang Kreyling’s group at the Institute of Lung Biology and Disease in Munich, Germany. ’In animal experiments, we found that particle deposition is initially very low (in newborns) but later it significantly increases,’ says Tsuda. That increase correlates to the alveoli being formed, which is at approximately two years of age in humans. ’Alveolar shape is important for chaotic mixing to occur and smaller alveolar size is [important] for deposition,’ explains Tsuda. ’Thus, deposition peaks at the age of 1?-2 years (the first 3 weeks in rat).’

Current drug dosage guidelines assume that drug uptake has the same efficiency in adults and children, explains Chantal Darquenne, who researches the fate of aerosols in the lungs at the Department of Medicine at the University of California, San Diego, US. ’The study suggests that the amount of nanoparticle deposition in the lungs of children varies with age,’ she adds ’It is therefore important to take into account difference in deposition amount when one has to set up drug dosage for children.’ Tsuda agrees but also suggests this difference could see more treatments using inhalation as a non-invasive route. ’I think in the future we should explore the lung surface as site for immunisation using aerosols exploiting the large & easy-access lung surface,’ he says