In a major government reshuffle, China has created an energy watchdog and downgraded its drug regulator to improve governance in the two fields. The 11th National People’s Congress - China’s top legislature - approved the government reform plan during its first plenary session on 15 March.

The plan creates a National Energy Commission (NEC), along with a national energy bureau to carry out its day-to-day work. The bureau will remain under the governance of the powerful National Development and Reform Commission (NDRC), and takes over the management of China’s nuclear power stations. 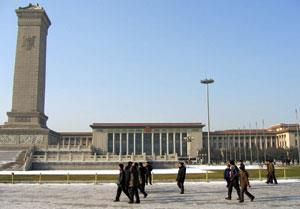 Great Hall of the People, home of the National People’s Congress

The new energy ministry is less powerful than many commentators had expected. ’But it is too optimistic to expect an energy ministry to concentrate all these powers overnight,’ says Han Xiaoping, president of energy policy think-tank China Energy Network. ’Before the reform, more than 13 ministries or administrations were involved in energy governance and many State-owned energy conglomerates would not see their powers completely controlled by one powerful ministry.’

But with the establishment of a specialized energy watchdog that has nuclear power governance, a basic energy regulation framework has been formed, according to Han.

Meanwhile, the corruption-afflicted State Food and Drug Administration (SFDA) has been downgraded from being an independent government department, to being governed by the Ministry of Health. In a press conference on 16 March, SFDA head Shao Mingli confirmed that its role in approving drugs and supervising the medical market will be unchanged.

Industry experts have welcomed the move. Ken Ren, president of Accelovance (China), a clinical trials consultancy, says that the SFDA seems to retain its role of approving drugs and supervising the medical market.

But he adds that in the wake of the arrest and execution of former SFDA head Zheng Xiaoyu on corruption charges, SFDA could become more cautious and conservative in approving new drugs.

Nathan Zhang, president of Beijing-based CRO (contracted research organisation) Sinocro, disagrees. The recent slowing process in drug approvals is because some SFDA officials and previous approvals are being investigated and reviewed. With the replacement of SFDA, its normal function will resume, he says.