Membranes containing pores made of carbon nanotubes could improve the efficiency of industrial processes such as desalination.

Membranes containing pores made of carbon nanotubes could improve the efficiency of processes such as desalination and removing CO2 from industrial emissions. 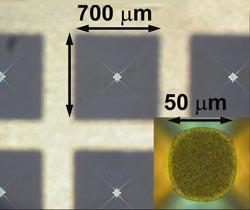 Chemists from the Lawrence Livermore National Laboratory, California, US, led by Olgica Bakajin, produced such a membrane using chemical vapour deposition to grow vertical arrays of double-walled carbon nanotubes (CNTs). The array was covered in silicon nitride, which formed an impermeable barrier between the CNTs. Ion milling and etching was used to expose the ends of the CNTs, forming pores through the membrane.

Bakajin’s team found that only nanoparticles smaller than 2nm could pass through this membrane. Further analysis with a transmission electron microscope confirmed that the CNT pores were around 1.6nm in size, which is smaller than the pores in previous CNT-containing membranes.

Despite their small size, the pores proved highly efficient at transporting gases and liquids. ’The gas and water flows that we measured are 100 to 10 000 times faster than what classical models predict,’ said Bakajin. The chemists are now trying to uncover the factors responsible for this efficient transport, predicting that the atomically smooth CNT walls are likely to play an important role.

The work is welcomed by Milo Shaffer, a lecturer in nanomaterials at Imperial College, London. ’The paper makes a genuine attempt to study nanoscale flows at the boundary between continuum and molecular scales,’ said Shaffer. ’There are excellent prospects for both further scientific studies and a new class of separation membranes.’