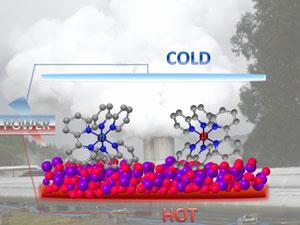 Scientists in Australia have improved a technology that recycles waste heat into useable energy by using ionic liquids containing cobalt redox couples as the electrolytes in thermoelectric cells.

Thermoelectrochemical devices generate power when a temperature gradient exists across a redox couple. The power generated is not yet enough to use as a primary energy source, but thermoelectric cells are useful for harvesting waste energy from energy production.

Aqueous or organic solutions traditionally form the electrolyte in thermoelectrochemical cells. The volatility of water and most organic solvents restrict working temperatures as the solvent can evaporate, reducing the long term stability and power output of the cells. Ionic liquids have extremely low vapour pressures, because of the strong ionic interactions, so do not easily evaporate. Their low thermal conductivity compared to water also helps ionic liquids maintain the temperature gradient across the device.

The outstanding performance of the device developed by Jenny Pringle, from Deakin University, Melbourne, and colleagues Doug MacFarlane and Ted Abraham at Monash University, stems from the high entropy difference of a Co2+/Co3+ redox couple. Upon reduction, the transition of cobalt from low to high spin causes a large change in metal–ligand bond length, and is thought to be the reason that this system produces such high voltages.

‘Although the power from these devices is not massive, it is enough to offset demand. They have advantages over solid semiconductor devices as they could be flexible, cheaper and work at lower temperatures. For example they could be wrapped around hot pipes in power plants,’ explains Pringle.

Commenting on the potential of thermoelectric devices to recycle ambient heat in a residential or office setting, Pringle says ‘they would work, but due to the smaller temperature difference, the power recovered would be lower.’

‘Power generation typically requires temperatures of over 1000 °C. This technology can concentrate low-grade waste heat in the 100–200 °C range into high density useful power,’ comments George Chen, an expert in electrochemical technologies at the University of Nottingham, UK.

Joseph Heremans, who researches waste heat recovery at Ohio State University, US, has concerns about the wider application of the devices. ‘Electrolytic devices have moving parts, unlike classical thermoelectrics, because they require fluid motion, if not a pump. They can be designed so that natural convection takes care of this, but the devices are still sensitive to orientation. This would render them unsuitable for transport applications.’

Pringle says that, as this is the first report of a cobalt redox couple being used in ionic liquid electrolytes for thermoelectrochemical cells, they are still learning how they work.