French researchers have used highly sensitive mass spectrometry to help solve a key question surrounding economic inflation in Europe during the 16th and 17th centuries. For decades historians have argued about why there was a gradual but inexorable increase in prices in Europe between around 1520 and 1650 - known as the great Price Revolution. One influential school of thought postulates that the inflation was due to the Spanish economy being flooded with Mexican silver coins.

Now, Anne-Marie Desaulty and colleagues from the University of Lyon have carried out high-precision isotope analysis of coins from Europe and the Americas from the relevant period and shown that there was no huge influx of Mexican silver into Spanish coinage at this time. 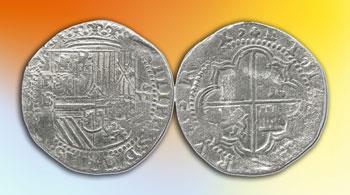 An eight reales silver cob struck in Potosi, Bolivia, under the reign of Philip II

Analysis of isotopes of lead and copper, both found in coins of the time, have been used to establish the provenance of coins: ores from different regions can have different isotope signatures. However, lead isotope ratios can be difficult to distinguish, and copper from other sources was often added to coins later on if the coins were re-minted.

Analysis of silver isotopes has until recently been too tricky because the ratio of its two stable isotopes, silver-107 and 109, has been difficult to measure accurately. Now, multiple collector inductively coupled mass spectrometry is sufficiently sensitive to obtain a meaningful isotope fingerprint from samples and spot the source of the silver ore used in the coins.

The researchers profiled copper, lead and silver isotopes from coins from Europe and the Americas. The results showed that Mexican silver did not enter Spanish coinage from the 16th century to the beginning of the 17th century. ’On the other hand, Spanish coins struck under the reign of Philip V [1700-1746] have a purely Mexican signature,’ Desaulty says.

The findings suggest that inflation in Spain during the 16th and 17th centuries did not correlate with a massive influx of Mexican silver into Spanish currency, but that it took 80 years for Mexican silver to completely replace European silver in Spanish coinage. ’The results thus call into question the secular idea that the "prices revolution" is related to the massive arrival of American metals,’ Desaulty says.

Commenting on the work, Matthew Ponting, who analyses ancient coinage at the University of Liverpool, UK, says: ’The fact that South American sources and some Spanish sources cannot be distinguished by lead isotopes but can be separated through the use of silver isotopes is particularly interesting and the underlying reasons for this are very informative and suggest possible lines of enquiry to be explored in other areas of archaeology and numismatics.’

Ponting points out that neutron activation to measure trace elements has been successfully used to distinguish between silver coins struck in different locations in South America. ’Bringing together isotopic and trace element studies is very clearly a way forward for the investigation of ancient and historic coinages and the economies that they served.’