Cold fusion back on the menu

Most chemists would rather forget all about cold fusion. After the barrage of criticism dismissing Stanley Pons and Martin Fleischmann’s sensational 1989 claims that nuclei could be forced to fuse and release excess energy at room temperature, only a small core of researchers has kept the idea from fading away entirely.

Yet preparations are under way for an invited symposium focusing on cold fusion and low-energy nuclear reactions at the American chemical society’s (ACS) 2007 conference in Chicago next week. Isolated presentations have been scattered around ACS meetings before, and the American physical society (APS) groups together a number of cold fusion researchers every year, but the last comparable session was ’so far off I can’t remember’, according to cold fusion advocate George Miley, of the University of Illinois, US. Even Fleischmann himself has a paper at the ACS, though the eighty-year old chemist will not be attending. 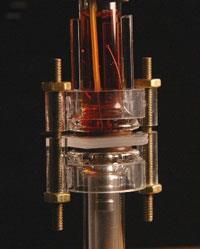 A low energy nuclear reaction cell used this year at the University of California, Berkeley, US, in an attempt to replicate research conducted at the US Space and Naval Warfare Systems Center, San Diego

’I feel there is a strong rebirth of interest in cold fusion,’ said Miley. He and other cold fusion supporters are taking their ACS presence as one more indication of the subject’s growing respectability. Organiser Jan Marwan said he was very surprised at how easy it was to gain acceptance for the symposium. But Gopal Coimbatore, program chair of the ACS’s division of environmental chemistry, felt that unless a forum was provided, the subject might never get discussed; and ’with the world facing an energy crisis, it is worth exploring all possibilities’.

The chances of cold fusion meeting that crisis may seem remote, but enthusiasts point to recent research from the US navy’s Space and naval warfare systems center (Spawar) in San Diego, California. Here, Stanislaw Szpak and Pamela Mosier-Boss have claimed a ream of evidence for nuclear reactions occurring in a system similar to the 1989 reports.

Pons and Fleischmann suggested that electrolysis could pack deuterium nuclei into a palladium lattice so tightly that they were fusing together; Szpak and Boss now claim to have speeded up this process by co-depositing palladium and deuterium onto a thin wire subjected to an electric field. They have used plastic
films - so-called CR-39 detectors - to track charged particles emerging from their reactions, publishing most recently in Naturwissenschaften. And, unlike the original 1989 experiments, the researchers claim their results are easily reproducible, with other groups reportedly detecting products of nuclear reactions such as alpha particles and gamma rays.

Acceptance by the scientific community is still the main target for cold fusion advocates - hence the importance of replication, appearing at major conferences, and publishing in peer reviewed journals. In this at least, success seems imminent: Miley says his cold fusion paper is the first to be accepted to the Journal of Fusion Energy, which normally covers ’hot’ thermonuclear fusion or sonofusion (which uses pulses of sound to rapidly compress bubbles in liquids). Meanwhile, Scott Chubb, who chaired a cold fusion session at an APS meeting in March, feels that Physical Review Letters, one of the top physics journals, may finally start accepting papers in the field. Avowed critics of cold fusion don’t see anything to shout about, though. Frank Close, of the University of Oxford, UK, says he sees no renewed interest, ’just the usual suspects recycling’. Indeed, Fleischmann’s ACS report is a re-presentation of research from the 1990s, showing that his calorimetry measurements were accurate. Bob Park, at the University of Maryland, US, agrees, but concedes that ’there are some curious reports - not cold fusion, but people may be seeing some unexpected low-energy nuclear reactions’.

But will the flare-up of cold fusion excitement last? Chubb is sure of it, but Fleischmann himself is less bullish. He approves of the Spawar research, but, as he told Chemistry World, ’my optimism is tempered by realism’. And Close’s opinion is clear: ’Let’s not confuse noise with signal’.