US researchers have developed a test to quickly and accurately measure arsenic levels in drinking water down to very low concentrations. The test uses a solution of gold nanoparticles that changes colour in the presence of the toxic metal. It is hoped that the research will simplify the task of mapping out hotspots of arsenic contamination across the world.

All drinking water contains minute levels of arsenic, but in some parts of the world - such as Bangladesh, India and south-east Asia - levels can be well above the 10 parts per billion (ppb) limit recommended by the World Health Organization (WHO). Once discovered, removing arsenic is a relatively simple process - but current field-tests are time-consuming and require hazardous chemicals such as mercuric bromide and sodium borohydride.

’Our process is much simpler, as well as highly sensitive and selective - accurate to about 3 parts per trillion and selective over other metals. Just add the water and a simple colour change will indicate how much arsenic there is,’ says Paresh Chandra Ray, who led the team at Jackson State University Mississippi, US. 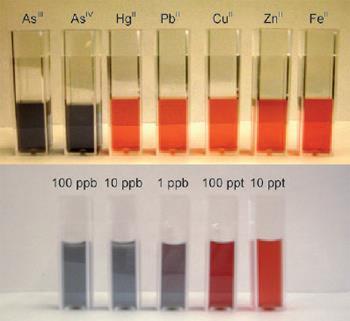 The colour change can be seen when arsenic is present as opposed to other metal ions (top), and at different arsenic concentrations (bottom)

Ray’s team modified gold nanoparticles by attaching large organic ligands to their surfaces. These ligands - such as glutathione, dithiothreitol or cysteine - complex to arsenic and hold on tightly.

Each arsenic ion can bind to three ligands, allowing it to hold up to three gold particles together - more arsenic ions mean more clumps of these particles. The colour of the nanoparticle liquid depends on the size of the nanoparticles, so creating larger clumps of gold nanoparticles causes the colour of the solution to change from orange to black. A field-based colorimeter can then be used to measure the colour change precisely - revealing exactly how much arsenic is in the water.

To boost the sensitivity of their test, the team used a technique called dynamic light scattering to determine the small changes in particle size in their samples, and were able to detect arsenic concentrations down to just a few parts per trillion - much lower that the WHO arsenic guidelines.

’This is a very interesting technology with a lot of potential,’ says Andrew Meharg, an expert on testing water for arsenic at the University of Aberdeen, UK.

’The increased accuracy would allow us to map out areas of arsenic-contamination much more effectively, and there are vast areas of landscape that urgently need this kind of mapping. This method also simplifies the testing process enormously, so it will not require any special training or awkward chemicals.’

However, Meharg notes that rigorous trials will be needed first. ’Results from across the world will need to be cross-validated with ICP-MS [inductively coupled plasma mass spectrometry]. Also, the method must be cost effective, and shown to be robust - for example, if the water has a high content of organic matter.’ When contacted by Chemistry World, Ray declined to comment on the costs and robustness of the test - but is confident that the process can be made portable and practical for ’daily-life’ applications.