Chemists in China have devised a system which uses gold nanoparticles to detect glucose in the brain, based on a simple colour change test. They hope their system will simplify the study of brain chemistry.

As the primary source of the brain’s energy, glucose levels can provide information about the organ’s function. However, measurements are prone to interference from other electrically active species. ’We wanted to find a new effective method to improve [the study of] brain chemistry,’ says Lanqun Mao of the Chinese Academy of Sciences’ Institute of Chemistry. ’We tried colorimetric methods using gold nanoparticles because by taking advantage of their colour change we can very easily detect the presence of glucose.’

The team found that a red solution of dispersed Au nanoparticles changed in colour to purple-blue on addition of salt, as it caused the particles to aggregate together. However when they added salt to Au nanoparticles which were mixed with single-stranded DNA, no colour change was seen. The ssDNA protected the nanoparticles, which remained dispersed in solution and red in colour.

Building on this, the team added glucose oxidase and Fe2+ to the nanoparticle and ssDNA mixture. When they added glucose to this new system it triggered a series of cascade reactions. Glucose oxidase broke down glucose to produce H2O2 which, in the presence of Fe2+, formed hydroxyl radicals. The radicals then cleaved the ssDNA in the mixture. As the ssDNA was no longer able to protect the nanoparticles, adding salt caused them to aggregate, and the red solution turned purple-blue. 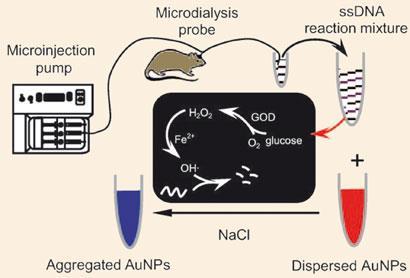 The team tested their system on microdialysis samples from rats. ’When we added the sample into solution it turned blue,’ said Mao. ’So you can judge the presence of glucose in the rat brain simply by seeing the change of colour.’ Using UV-Visible spectrometry the team calculated the level of glucose to be 2.4mM, consistent with levels reported by other methods.

Thanks to the enzyme, glucose oxidase, the assay is selective and is unaffected by other species present. Tony Cass, professor of chemical biology at Imperial College London, UK, says that the team’s method involves some clever chemistry. But, as long incubation times are needed, he says it can’t give the near real time results (within a few minutes) of electrochemical methods. However the team hopes the system will provide a new simple way to assess glucose levels, providing information in areas such as brain disease.