Paper that responds to changes in its environment 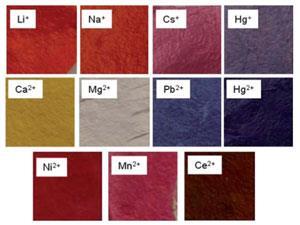 Paper with the ability to change colour in response to different ions, solvents and UV irradiation has been developed by US scientists and could be used to develop faster and more stable chemical sensors.

Paper, a material first made 2000 years ago, has now been adapted by Hongyou Fan and co-workers at Sandia National Laboratories, who introduced this sensing property by incorporating polydiactylenes (PDAs). PDAs are known to have applications in sensing, but they have only been applied in structures such as thin films and powders. By incorporating PDAs into paper, the team has made sensors with a much larger surface area, which can function more quickly and with greater sensitivity than thin films and powders.

The researchers found that the sensor paper shows colour changes ranging from red to brown to purple, depending on which of a variety of metal ions it is exposed to. At first, the initially prepared paper does not show a response to the ions, however, after the diacetylene wires in the paper have undergone polymerisation by UV irradiation, a colour change can be observed. The binding of different ions causes the diacetylene wires to position themselves in a certain way before polymerisation occurs. Upon UV irradiation polymerisation then occurs and the molecular ordering is translated into colour.

Jianhua Liu at the University of California, Santa Barbara, US, praises the ‘elegantly designed approach’ and notes that the work ‘demonstrates the promising applications of diacetylene papers’.

Fan says the paper shows mechanical robustness and can be folded, handled and cut with scissors like regular paper, which vastly increases its practical uses. He admits that further improving the sensors is going to be ‘a challenge’, but he hopes that in addition to its potential use in sensing, the paper will have applications in photovoltaics and in preparing luminescent paper.