A new environmentally friendly concept in functionalising polymers allows coloured dye to be integrated directly into polymers that can be used in clothes and packaging, say UK scientists. 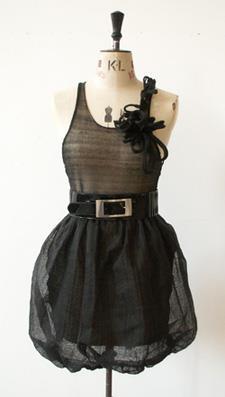 A dress made of the PLA fibres is being exhibited in the Science Museum in London, UK

New ways to make environmentally friendly polymers are needed due to dwindling reserves of petroleum and poor degradability of existing polymers. Polylactic acid (PLA) may provide a solution; it is a polyester material made from renewable resources that uses less petroleum to make than comparable petroleum-based fibres. It also degrades easily in landfill. However, use of PLA in commercial fabrics has not been popular, in part because of difficulties in the dyeing process.

They have made a catalyst with a dye attached, which initiates the ring-opening polymerisation of lactide into PLA and then becomes covalently incorporated into the polymer. The dye is also incorporated and causes the polymer to be coloured. Because the dye becomes part of the polymer structure, there is no excess dye to wash away as in conventional processes, so pollution is also minimised. ’People often worry about getting the catalyst out of the polymer because of health and safety or discolouration, but we’ve taken a new approach and can tune the catalyst to incorporate the desired colour,’McGowan says. The team have made black, red, yellow and purple PLA fibres. A dress made from their black PLA fibres is currently part of an exhibition at the Science Museum in London, UK.

Wayne Hayes, a polymer chemist at Reading University, UK believes the concept has great potential for the textile industry. ’PLA is becoming increasingly important because of sustainability,’ he says. ’The advantage this method offers in terms of processing and delivery to the customer represents a significant technological advance.’

The firm founded by the researchers, DyeCat, has so far worked with dyes, but the team believes the technique could be applied more widely. McGowan suggests that functionalising the polymers to incorporate fluorescent or UV-active molecules could be useful for PLA used in packaging. Hayes believes the idea could be used to embed antimicrobials or even fragrances into sportswear, fundamentally altering the way textiles are designed and used.