Multitalented nanoparticle can track down, illuminate and treat cancer cells

Korean chemists have assembled a multitalented nanoparticle that can hunt down, treat, and illuminate cancerous cells. The therapy combines diagnosis, treatment, and real-time monitoring of cancer progression, and although it may be several years before it reaches the market, it is a bold step towards useful nanoparticle-based medicine.

’We have created a new type of magnetic nanoparticle that is designed to target only highly cancerous cells without harming normal cells,’ says Jinwoo Cheon, who led the research with Tae Gwan Park at Yonsei University in Seoul, South Korea. ’The particle is effective at delivering treatments to the cells and also has strong MRI and optical imaging capabilities.’

The particle has four key components. The core is a magnetic iron oxide nanoparticle, which can act as a contrast agent for MRI. Attached to the surface of this nanoparticle is the second component - a peptide that binds to integrin, a receptor found in higher quantities on the surface of cancerous cells. This allows the particle to tightly grip onto the target cells.

The third part is a small interfering RNA (siRNA) - a short fragments of double-stranded RNA are designed to block specific genes inside cancer cells. The siRNA works by shredding messenger RNA (mRNA), which prevents crucial proteins from being made and therefore stops tumour growth.

The final component is a conjugated organic dye molecule, which allows the molecules to be spotted under fluorescence spectrometry. This, combined with the MRI detection, should allow the progress of the disease to be closely monitored to track the success of any treatments. 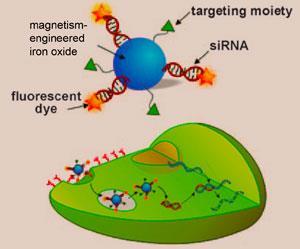 The nanoparticles are comprised of four different components - each of which has an important function.

The particle has only been tested in cell cultures so far, but the team is confident that there is good potential for success in animals. ’Most of the components are made from materials that are known to be non-toxic, so we are hopeful that our particles will be biocompatible,’ Cheon told Chemistry World. ’If everything goes well, it would take at least five years to reach the market.’

’These multimodal nanoparticles are an attractive proof of principle of what may one day be achieved in humans in terms of nanoparticle-based therapy,’ says Raphael L?vy, a bionanotechnology expert at the University of Liverpool, UK. ’But equally importantly, they are important tools to further our understanding of interactions of nanoparticles with cells.’