The shock waves caused as comets hit the early Earth could have helped promote the formation of amino acids and the early building blocks of life, say US researchers. 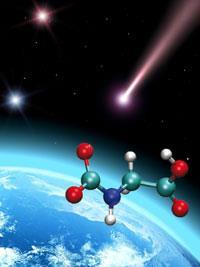 It is thought that amino acids and short peptides played a significant role in the chemical evolution that resulted in life on Earth, but researchers have historically disagreed on how these chemicals got here in the first place.

Researchers at the Lawrence Livermore National Laboratory and Stanford University have now run theoretical simulations of shock compressions that mimic the conditions created when a comet hits the Earth, which suggest that the ingredients for life on Earth could have been delivered from space.

Comets are made of dust, ice and compressed gases. The ice is predominantly water, but is also known to contain small molecules that promote bacterial growth - prebiotic molecules - such as carbon dioxide, ammonia and methanol.

Nir Goldman and colleagues studied molecular dynamics simulations of shock waves after a comet strike to see if the prebiotic ingredients for life could survive the conditions during and after impact.

Initially the team thought the conditions after a direct comet strike would be too intense for the compounds to endure, but they then considered comets that might have struck the Earth from a gentler angle. ’That would mean that the comet impact would produce much lower temperatures and pressures and maybe these would be low enough that something like an amino acid might survive if it was formed,’ Goldman told Chemistry World.

The team also found that the shock waves from a comet’s impact can promote short-lived C-N bonded oligomers, and that when the pressure dropped after impact, these oligomers break up to form stable complexes containing the amino acid glycine.

’The computational studies provide some compelling evidence for complex organic chemistry under conditions of extreme pressure and temperature such as those expected during oblique impact of a short-period comet with the early Earth,’ says Terence Kee, an astrobiology expert at the University of Leeds, UK. ’They demonstrate that small organic polymers are produced under high pressure and temperature which subsequently break down to form important molecules such as glycine and possibly higher oligomeric peptides,’ he adds.