Scientists from France and Spain have created a clever chemical model to investigate mechanisms driving the evolution of guanine–cytosine coding regions and found that certain spontaneous mutations are more likely to arise at specific regions of DNA.

The equilibrium between genomic guanine–cytosine (GC) and adenine–thymine (AT) base pairs is known to favour higher AT content. Rare GC tautomers (G*C*), formed after a spontaneous double proton exchange between bases, may be responsible for the GC?AT mutational bias.

Tautomeric equilibria can yield the rare tautomeric form of GC

José Pedro Cerón-Carrasco, at the University of Murcia in Spain, and Denis Jacquemin, at the University of Nantes in France, combined two quantum methods to model genetic sequence impact on spontaneous GC?G*C* mutations. The model consisted of a GC base pair arranged in the middle of a DNA trimer with every potential combination of bases on either side. It was also extended by adding explicit water molecules to the middle GC base pair to mimic the aqueous environment in cells, and to investigate water’s catalytic effect in proton transfer reactions resulting in the formation of G*C* base pairs.

Cerón-Carrasco explains that ‘in the absence of an efficient external proofreading mechanism, it is just a question of time – and evolution is not in a hurry – that the genetic code naturally evolves itself to a complete AT sequence or, in other words, to the AT catastrophe.’ The equilibrium point will consequently depend on how effective repair mechanisms are. ‘This is a crucial point, not only to better understand evolution but also to refine evolving computer codes.’

The three base pair model mimicked hydrogen bonds between base pairs and p–p stacking interactions between neighbouring bases on the same strand of DNA. Hence, it predicted tautomeric mutations induced in the middle GC base pair. Investigating how DNA sequence effected GC?G*C* mutations revealed that tautomeric mutation was more likely to occur at GC-rich regions of the genome, particularly in GGG sequences, where water molecule rearrangement enhances mutated base pair stability. The GC?AT error is therefore more likely to occur in coding fragments of DNA. 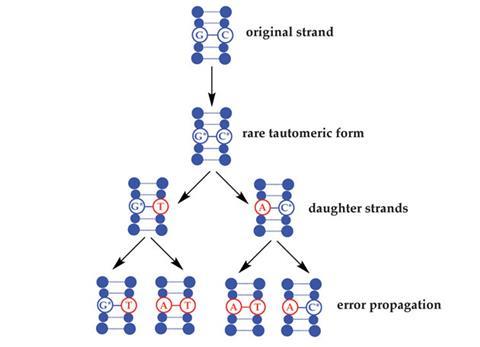 Henry Schaefer, director of the center for computational quantum chemistry at the University of Georgia, US, thinks the study is a powerful example of computational chemistry’s growing role in solving important biochemical problems. ‘Only the future will show how far these new insights will go, but I would not be surprised if they have a significant influence on the future of molecular modeling’.