Current recycling procedure may do more harm than good 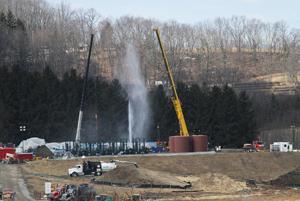 Estimates suggest that in the next 50 years, over one trillion gallons of water will be used in shale gas extraction but research from scientists in the US suggests that environmentally detrimental compounds are being created when this fluid is recycled.

Shale gas is found in rock formations kilometres underground. Hydraulic fracturing, also known as fracking, facilitates the release of this energy dense fuel in a cost-effective and timely manner. Water, sand and a combination of other additives are pumped into the ground at high pressure, breaking the shale formations apart, allowing the gas to migrate to the surface where it can be collected.

Some of the chemical additives and the vast quantities of water used for fracking have raised environmental concerns. The high dissolved salt and organic content of reclaimed fracking fluid, which includes hydrocarbons, greases and biological matter, means it is unsuitable for immediate reuse. And there’s a risk it would be toxic to aquatic organisms so it cannot be released into rivers or groundwater. So if we can’t reuse the fluid, and we can’t dispose of the fluid, we have to treat the fluid.

Rice University scientists, Andrew Barron and Samuel Maguire-Boyle, recognised that in order to determine the best way to treat reclaimed fracking fluid; they should first identify the organic contaminants within it. 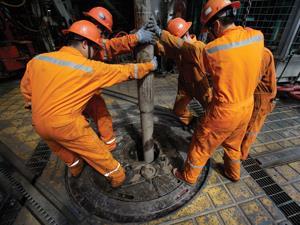 Although the present study looked at shale wells in the US; the lessons learned are directly applicable to other regions

Barron was surprised that the majority of compounds identified in the reclaimed fracking fluid were hydrocarbons. This is not a particular concern, ‘especially when compared to the toxic polyaromatic hydrocarbons produced by coalbed methane extractions,’ he explains.

‘The interesting thing about shale is that the chemicals within it have not seen any movement, exposure or equilibrium since they were formed from animal and plant remains in Jurassic times,’ says Barron. Shale’s low permeability means that it retains the salinity of the seawater. Therefore, when shale comes into contact with the fracking fluid, all of the salts, organic minerals and compounds leach out and solubilise. The fluid that rises to the surface is full of these compounds.

George King, a distinguished engineering advisor from hydraulic fracturing company Apache Corporation, says this is a refreshing study – particularly with regards to the sampling and analysis methods, as well as the observation of reduced polycyclic aromatic hydrocarbons in reclaimed fracking fluid. ‘I believe industry can benefit from working with academia to find fit-for-purpose solutions to recycling produced waters from fracturing,’ he adds.

Currently, treatment methods use halogen containing oxidants to remove bacteria from the water. However, these oxidants also react with naturally occurring hydrocarbons, forming environmentally detrimental chlorocarbons and organobromides. Therefore, treating the water chemically may not be the best solution.

‘What should we be more concerned about?’ asks Barron. ‘Naturally occurring chemicals that have been there since Jurassic times, or chemicals that we are forming and releasing into the environment?’

Barron says that their research suggests that physical treatments, like separations, should be employed on long-term safety grounds and that chemical treatment ought to be limited.