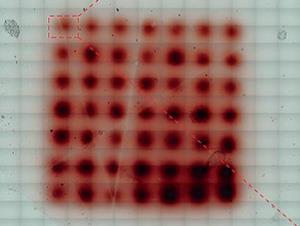 Scientists in Australia have lit the path towards replacing wires in electrochemical devices by using visible light to create electrical currents on a stabilised silicon semiconductor electrode.

Electrodes in conventional devices must be connected to an external electrical circuit, often requiring a mesh of wires and bonding pads to produce an array of independently controlled electrodes. These components take up a vast amount of space on electronic chips, limiting the electrode density.

To address this problem, Justin Gooding and his colleagues from the University of New South Wales, Australia, have developed a photosensitive, surface modification layer for silicon electrodes that prevents oxidation in an electrolyte but is also sufficiently thin to allow electrons to transfer across it.

Gooding confesses that stumbling across the clever surface chemistry, involving the hydrosilation of 1,8-nonadiyne on oxide-free hydrogen terminated silicon, was completely by accident. ‘The importance of this surface modifying molecule is it has an alkyne at one end to attach to the silicon and a free alkyne at the other end to which an azide can be attached via click chemistry,’ explains Gooding. ‘We … discovered when we clicked on ferrocene that we could do electrochemistry without any appreciable oxidation occurring.’

When in contact with an electrolyte, the outer layer of the semiconductor electrode, in this case silicon, becomes depleted of charge carriers. Therefore, in complete darkness there is no electrochemistry. Upon illumination, the light generates carriers in the exposed area by exciting electrons from the semiconductor’s valence band to the conduction band – electrochemistry is effectively ’switched on’. This means each element on an array can be independently addressed by light, eliminating the use of individual wires to each electrode.

Gooding’s group were able to prove the potential of this light-activated chemistry through writing and reading patterns on the silicon electrode. A cartoon face was successfully written via light-induced electrodeposition of conductive polypyrrole. Wherever the surface was illuminated, monomeric pyrrole was oxidised into polypyrrole, creating a pattern on the electrode.

George Lane, an expert in electrochemical energy storage at Ioxus has high hopes for the technology: ‘The advent of this technology gives electrochemists a brand new tool to perform their investigations with, and it will be met with great interest in both the applied and fundamental domains of research.’

Srinivasan Sampath, an expert in surface chemistry and electrochemistry at the Indian Institute of Science, India, believes that it ‘may lead to the development of very sensitive, multiple analyte sensors in the future’.

Gooding is keen on expanding the scope of the research and is currently working on forming an electrode array for nucleic detection.