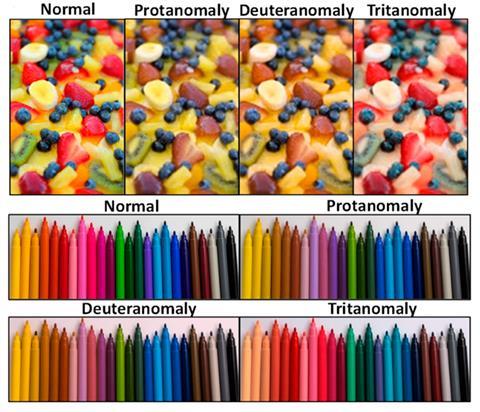 Contact lenses embedded with gold nanoparticles have been used to help correct red–green colour vision deficiency. The researchers believe the lenses will be more comfortable, effective and safer for wearers than the options currently available.

Although many variations exist, the most common kind of colour vision deficiency or ‘blindness’ is when people have difficulty differentiating red from green. People with colour blindness, which mostly affects men, are able to live perfectly normal lives day-to-day. However, not being able to differentiate certain colours can make some tasks difficult and can exclude people from certain jobs, for example, some types of driving. It can also make daily life harder in small ways, for example, not being able to tell if fruit is ripe, pick out clothes of the right colour or appreciate art in the same way as everyone else.

The first glasses to help people with colour blindness were created by James Clerk Maxwell in 1854. The idea of using contact lenses to correct colour vision is also not new, but previous lenses, such as the Chromagen lenses, are not as effective as the glasses.

‘For the colour vision deficient, the spectacle lenses are the most helpful, being darker tints, but the contact lenses are relatively undetectable,’ says Stephen Dain, an emeritus professor specialising in optometry and the science of vision at the University of New South Wales, who wasn’t involved in this study.

Adding gold chloride to molten glass has long been known to create ‘cranberry’ glass, which gives the glass a red tint. Ahmed Salih and colleagues from Khalifa University in Abu Dhabi drew inspiration from this ancient technique and added gold nanoparticles to soft contact lenses to give them a red tint that can help people with red–green colour blindness to better discriminate colours in this spectrum.

Salih says that they focused on using gold nanoparticles because they absorb light in the desired region for filtering, as well as being non-toxic and non-reactive. ‘The main challenges were in the fabrication stage,’ he says. ‘We tried to optimise the proportions of the nanoparticles to the material of the lenses to get the optimum material properties, while trying to avoid agglomeration or aggregation of the nanoparticles.’

A key benefit of the new lenses is that they are very similar to modern soft contact lenses, with good water content, making them less likely to dry out. When the team compared the transmission of light through their lenses with that of other colour correcting glasses and lenses, they found their lenses were just as good.

The biocompatibility of the gold nanoparticles also makes the lenses attractive, according to Dain. Although he says ‘the only colour vision advantage would be if the tint could be made darker than the current ones… One of the problems with the Chromagen was getting enough dye into the soft contact lens to make it dark enough to be really effective.’

Salih and colleagues still need to test their lenses in a wider group of people and carry out further tests to assess how oxygen permeable the lenses are. But the results are promising. ‘I believe that there is, and there will be, a high demand for such lenses, because from a comfort point-of-view, many people would rather wear tinted lenses like ours than tinted glasses,’ he says.