Here’s a new twist on nanotubes: chemists have found a set of organic molecules that spontaneously assemble themselves into a helical spiral with a hollow core1.

The tubes ??- a molecular match for fusilli pasta twists - were discovered by accident, admitted Jeremy Sanders of the University of Cambridge, UK.

His group were making modified naphthalenediimide molecules2, cooked up by microwave heating of simpler compounds. But these naphthalenediimide building blocks instantly joined together by weak hydrogen bonds, creating a polymer string that wrapped itself into a helical nanotube.

The direction that the helix twists is controlled by chiral amino acids, used in the synthesis of the building blocks.

’It looks like a simple way of generating organic nanotubes,’ said Harry Anderson of the University of Oxford, UK. Organic nanotubes have been made before, but only by using building blocks which require long syntheses, and they are difficult to modify once the tube has been built. 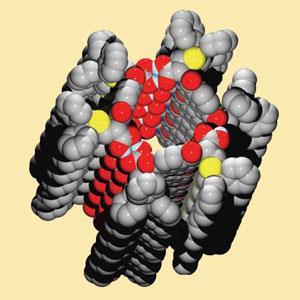 Although the nano-fusilli are stable in solid form, the structures continually break up and reform in solution. This dynamic reversible assembly means that the chemical groups on the tubes’ outer walls are always changing, and may be easier to modify.

Sanders adds that a single structure could be locked into place by adding further molecules that bind to specific configurations of amino acids on the nano-fusilli’s walls. However, Anderson believes that the tubes formed in solution may not be as long or clearly defined as those in the solid state.

The researchers are currently investigating possible applications for their intriguing nanotubes, which Sanders says are ’not much more than an aesthetic thing at this stage’. Aside from their potential for flexibly decorated outer walls, the solid structures could also act as tiny molecular sieves: the tubes’ 12 ?ngstr?m-wide inner core could be used to trap molecules.

The Cambridge team are also investigating whether their nano-fusilli is one of a kind, or if larger related building blocks might open up a whole series of helical structures.