Could life have emerged inside inorganic shells?

The basic components of cells can operate within the bounds of inorganic membranes made from nanoparticles, a new study shows. The authors say such membranes provide an alternative model for explaining how the first cells evolved from simple, inorganic molecules.

Chemists created silicon-based membranes with hydrophilic and hydrophobic properties akin to those of lipid bilayers in natural cells. Nanoparticles self-assembled in oil to form ’protocells’, enclosing drops of water inside porous silicon shells. ’What was really interesting was that not only could we stabilise the droplets - which had been shown before - but that the nanoparticle-based shell could be considered as a primitive, semi-permeable inorganic membrane,’ says Stephen Mann, one of the researchers based at the University of Bristol, UK.

To produce the desired water-loving/hating membrane, the researchers functionalised the surface of hydrophilic silica nanoparticles with silanol and dimethylsilane groups. Shaking the nanoparticles in oil and water made them pack together at the oil-water interface. According to Mann, the approach is simpler than chemical syntheses required to make artificial phospholipids, which are often used in artificial cell membranes. 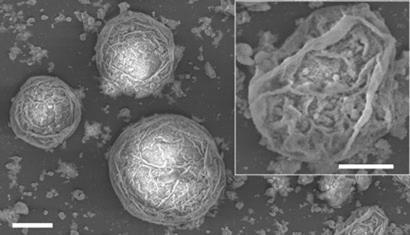 One of the key requirements for synthetic protocells is permeability - something that’s proved difficult to perfect with lipids. In this respect, says Pasquale Stano, a synthetic biologist at the Roma Tre University in Rome, Italy, the new inorganic membranes offer an advantage. ’You can add material in the oil and it will slowly go through the interface formed by these silica particles,’ he says. The researchers also show that their protocells can host functioning DNA, protein-making machinery and enzymes, and achieve impressive turnover rates for enzyme-catalysed reactions taking place in the pores.

Perhaps most intriguing though, is Mann’s suggestion that compartments similar to his nanoparticle-stabilised droplets could have formed the basis of early cells. ’Lipids and fatty acids may not have been available in the very early stages of pre-biotic organisation because of the complexity of their chemical synthesis,’ says Mann. ’As a plausible alternative, inorganic-based mechanisms might have emerged to produce the membrane-bound compartments required for the origin of life. Our protocell model demonstrates how a very primitive system might occur, rather than saying this is how it did occur.’

Primitive cells would have had to function in water, so the researchers also show that their protocells can be transferred into water from oil. ’It’s a little bit tricky,’ says Stano. ’But as a principle, the procedure they propose is good.’ However, he thinks many people will disagree with Mann’s origin of life scenario.