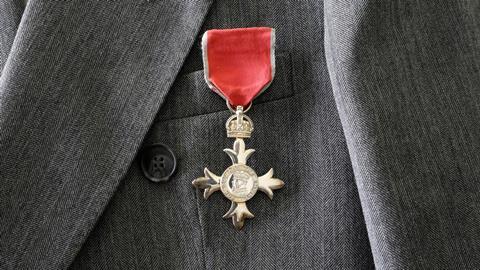 The men and women who helped organise the UK’s response to the Covid-19 pandemic featured heavily in the 2021 New Year’s Honours list. Out of the 1239 people listed, about 18% received honours for their services during the coronavirus crisis.

There are a few scientists among those recognised for their achievements during the pandemic. Statistician Phillipa Spencer from the Defence Science and Technology Laboratory (DSTL) received an Officer of the Order of the British Empire (OBE) for her services to defence. A chemist by training with a PhD in machine learning, Spencer has worked at DSTL for 19 years. She has been involved in providing the government with Covid-19 data. In 2019, her statistical models were used to inform the clean-up efforts after the Novichok nerve agent poisonings in Salisbury.

Joanne Thwaite, a microbiologist at DSTL, was also awarded an OBE for services to the NHS during the pandemic, supporting diagnostic laboratories in hospitals. Paul Grant, the molecular virology scientific lead at Health Services Laboratories, was made a Member of the Order of the British Empire (MBE) for healthcare science services. He helped increase Covid-19 testing capacity by developing various probes and primers to circumvent reagent shortages early in the year.

Anthony Campbell is the only academic chemist on the list this year among those recognised for services to the science and research. Campbell works on calcium signalling, bioluminescence and uncovering the molecular mechanisms behind food intolerances at Cardiff University. He was made Commander of the Order of the British Empire (CBE).

Structural biologist David Stuart from the University of Oxford was knighted. Stuart is known for his work on x-ray crystallography of viruses – he determined the structure of the virus causing foot-and-mouth disease – and is director of life sciences at the Diamond Light Source, the UK’s national synchrotron.

University of Strathclyde physicist Allister Ferguson was given the rank of OBE. He works on ultracold atoms, and was instrumental in bringing together four Scottish and two Californian universities in a collaboration that promotes entrepreneurial activity in photonics.

A CBE was awarded to Sheila Rowan, director of the Institute for Gravitational Research at the University of Edinburgh. She led a team that became part of the collaboration at the US-based Laser Interferometer Gravitational-Wave Observatory (Ligo), which detected gravitational waves for the first time in 2015. She also works part-time as Scotland’s chief scientific adviser.

Also appointed CBE was materials scientist Ravi Silva from the University of Surrey. Since 2005, he has been director of the university’s Advanced Technology Institute, which supports research on solid state electronics and photonics. He also helped set up a carbon nanotechnology laboratory at Surrey.

Two leaders of innovation centres were also named in the honours list. Keith Thompson, who established the Cell and Gene Therapy Catapult, was recognised with a CBE, and leader of the Stevenage Bioscience Catalyst, Sally Ann Forsynth, received an OBE.