New anti-inflammatory drug says NO to side effects

Five years after the high-profile withdrawal of Merck & Co’s arthritis drug Vioxx from the market, French pharmaceutical company NicOx is trying to wow the regulators with its first-in-class anti-inflammatory drug naproxcinod.

The Sophia Antipolis-based firm has submitted a new drug application to the US Food and Drug Administration (FDA) for its cyclooxygenase (Cox)-inhibiting nitric oxide-donating osteoarthritis drug, which it hopes will be the first anti-inflammatory to be given the regulatory thumbs up since the Vioxx withdrawal.

Traditional non-steroidal anti-inflammatories (NSAIDs) such as aspirin work by blocking both the Cox-1 and Cox-2 enzymes, and for a time it was believed that while blocking Cox-2 interrupted the pain and inflammation pathway, blocking Cox-1 damaged the mucosal layer of the gut and caused ulceration.

NicOx has tried to find away around these problems by developing a dual-action drug that combines the well known and well tolerated Cox-1 and -2 inhibiting NSAID naproxen with a blood pressure-reducing nitric oxide donating moiety. ’The drug is administered as a capsule, and when it reaches the GI tract it is released and the link between the NSAID and NO donating moiety is cut by esterase enzymes,’ says Pascal Pfister, chief scientific officer of NicOx. 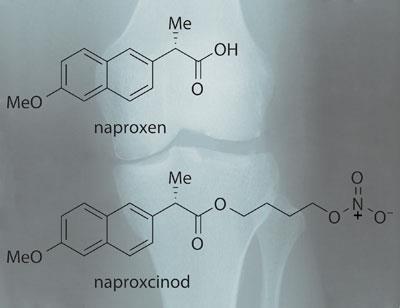 ’The biology of NO is fantastic,’ Pfister adds. ’Not only does NO dilate blood vessels and reduce blood pressure, but it also reduces platelet aggregation.’

This is important, he says, because those suffering with osteoarthritis tend to be over 50 years old so are also more likely to be at an increased risk of suffering cardiovascular problems. Indeed, Pfister says that 40 to 50 per cent of the patients in the Phase III trials of naproxcinod had hypertension and that while the control group taking naproxen had increased blood pressure compared to placebo, those taking naproxcinod had similar blood pressures to the placebo group.

’Traditional NSAIDs still dominate the osteoarthritis market, with naproxen accounting for 19 per cent of all prescriptions. Ibuprofen accounts for 31 per cent, which is frightening as it actually increases blood pressure the most,’ says Pfister. ’The benefits to the patient of receiving naproxcinod is that they will receive the same anti-inflammatory and pain reduction efficacy as naproxen while their risk of increasing blood pressure will be lowered.’ Pfister also notes that preclinical trials have indicated that NO has anti-inflammatory properties, and that during Phase I and II trials naproxcinod reduced the occurence of certain GI side effects.

’There is a need for new NSAIDs, especially for musculoskeletal pain - while the older drugs are very effective they have been hampered by toxicity to the GI tract,’ says Robert Moots, professor of rheumatology at the University of Liverpool and a spokesman for UK charity Arthritis Research Campaign. ’NSAIDs are among the biggest selling drugs by market share in the world and this drug holds significant promise for those patients that are unable to use other drugs that would be useful for them but can’t due to concerns about the side effects.’