A power plant that makes hydrogen by splitting water with concentrated sunlight launches in Almeria, Spain, on 31 March. It’s a glimpse into a possible carbon-free future that uses solar-driven chemical reactions to produce the gas. 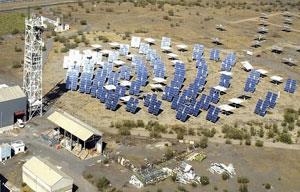 The reactor, Hydrosol II, is the largest pilot-scale project of its kind, though hundreds of thermochemical water splitting schemes have been sketched out on paper and tested in laboratories. The system will take in half a litre of water every minute and should produce around 3 kilograms of hydrogen an hour - equivalent to a thermal output of 100kW, explains project coordinator Athanasios Konstandopolous, who works for the Chemical Process Engineering Research Institute based in Thessaloniki, Greece.

That’s small fry compared to the tonnes of hydrogen produced every day by reforming natural gas, but the concept does avoid using up fossil fuels and emitting carbon dioxide - a must if hydrogen is to be a truly environmentally-friendly source of energy.

The pilot plant is the scaled-up version of a concept which has been tested in the solar furnace of the German Aerospace Centre (DLR), Cologne, for four years, and which shared the European Commission’s 2006 Descartes prize for scientific research. Industrial R&D partners Johnson Matthey Fuel Cells and Stobbe Tech Ceramics (Denmark) have joined the German, Greek and Spanish research teams making up the Hydrosol consortium. So far the whole programme has required only

7 million of funding, half of which came from the EU. If the larger system works and is economically feasible, the researchers hope to secure funding for a 1MW mass production plant, Konstandopoulos says.

At the core of the reactor are two honeycomb-like ceramic chambers coated with oxygen-deficient ferrite structures containing zinc and nickel. At high enough temperatures (800-1200?C) these materials strip water of its oxygen, leaving hydrogen gas to bubble away (Zn0.xNi(1-0.x)Fe2O4 + yH2O

As Christian Sattler of Cologne’s DLR explains, the high temperatures required are achieved by focusing sunlight onto the chambers, using a field of silvered mirrors that track the sun’s movement. The hydrogen-producing (water-splitting) and oxygen-producing (recycling) steps take place in two parallel chambers, so that there is no need to separate hydrogen and oxygen gases. When each chamber’s metal oxides have completed their reaction, their functions are swapped over - so that hydrogen is produced almost continuously, rather than in batches. Crucially, this modular approach means the system can easily be scaled up even further.

Sattler says that hundreds of similar thermochemical routes to hydrogen have been mooted, and tested, over the last decade. Among other popular options are zinc/zinc oxide cycles run at much higher temperatures. But much of the funding - particularly from the US Department of Energy’s (DOE) hydrogen programme - has been focused not on metal oxide reactions, but on more complicated lower temperature cycles involving sulfur and iodine chemistry, because these might be powered by advanced nuclear reactors (which generate temperatures of only 800-1000?C, not as high as solar concentrators). ’I don’t think there will be one best way, but the Hydrosol II project is the closest to a mass production scale,’ he says.

’It’s the biggest,’ confirms Alan Weimer, who works on the US DOE’s Solar Thermochemical Hydrogen Team (STCH) at the University of Colorado.

Competitive within a decade

Challenges for the Hydrosol team include checking whether their metal oxides and ceramics can withstand the high temperatures required for thousands of cycles - and, hardest of all, to produce hydrogen at a price economically competitive with steam reforming. ’This will be competitive within a decade,’ Konstandopoulos claims. ’We are hoping to generate energy (via hydrogen) at

0.06 per kWh, which will be roughly the price of hydrogen from steam reforming if you include the expected taxes on carbon dioxide production.’ Most of the cost, he adds, came from installing the field of solar concentrators rather than from the reactor itself - so the longer it runs, the more economical it becomes.

Konstandopoulos believes that alternative clean routes to hydrogen are not as attractive as thermochemical methods: electrolysis of water is too inefficient, while using a catalyst means extra steps have to be invested to separate hydrogen and oxygen gases. ’On the thermochemical side, more activity is definitely expected in the future,’ he says.