A microfluidic chip that can come up with a DNA profile in less than three hours has been designed by US scientists for use at crime scenes.

With current techniques, forensic scientists have to wait up to eight hours to get results. Using microchips to speed up the process has been investigated but integrating all of the profiling steps in one device has remained elusive until now. Richard Mathies from the University of California, Berkeley, and colleagues, in collaboration with the US Department of Justice, have produced a portable method to test DNA at a crime scene that integrates all of the steps in one device.

The new device incorporates all these stages. In the device, DNA is captured on magnetic protein-coated beads, which are then pumped through a polymerase chain reactor. This is where the DNA is amplified and fluorescently labelled. The labelled DNA is then driven through a gel and captured in the form of a plug. The plug is then injected into a column that separates mixtures of samples and gives a profile. The team tested the device by injecting two oral swab samples into it at the same time and within three hours the two profiles were given. 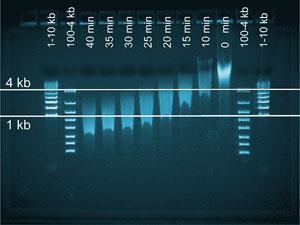 The device shows a very efficient transfer of materials, says Mathies. ’Current methods use only about 10 per cent of the available material. In our super efficient system, we use every molecule,’ he says, adding that the capability to perform the forensic profiling of single cells will allow crime investigators to access a wealth of information previously unavailable to them. ’Forensic scientists have to go into court to defend their results, so they need a high quality, robust method,’ explains Mathies.

Andy Hopwood, an expert in DNA analysis techniques from the UK’s Forensic Science Service, adds that the work is ’without a doubt a very exciting and significant development toward the total integration of the DNA-based human identification process onto a single microchip’

In the future Mathies’ team hopes to improve the sensitivity of the microchips, and put them into use at real life crime scenes.