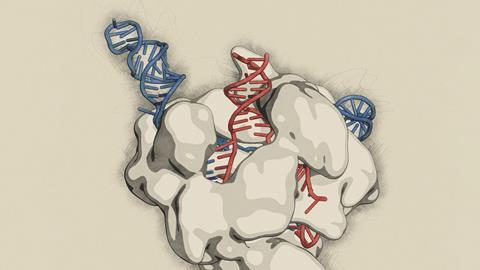 Targeting one of more than 3000 sites within the human genome with Crispr-Cas9 gene editing could lead to unwanted effects like cell death and genomic instability.

Crispr gene editing won the chemistry Nobel prize in 2020. Adapted from bacteria, it can introduce, modify or inactivate DNA sequences. Since its discovery, Crispr has become a popular tool for genomic research and is being tested for treating blood disorders, cancer and viruses such as HIV.

But Crispr’s ability to alter DNA also poses a risk to cells. Now, researchers in Spain have demonstrated how targeting certain DNA sites with Crispr can lead to cell toxicity and genomic instability.

The effect is mediated by the tumour suppressor gene p53. In a healthy cell, p53 is responsible for triggering cell death when DNA damage is detected. As Crispr works by cleaving both strands of DNA, it can sometimes trigger a p53 response, which kills the edited cells. Not only does this mean decreased editing efficiency, it also allows cells with a faulty p53 mechanism to proliferate and create genetically unstable cell lines.

The team analysed data sets across around 900 cell lines to identify 3300 gene editing locations that demonstrated strong toxic effects. Genomic regions harbouring active chromatin, such as gene regulatory elements, were more heavily associated with p53-associated toxicity. Extrapolating from their findings suggests that around 15% of all human genes could contain at least one editing point that would lead to cell toxicity.