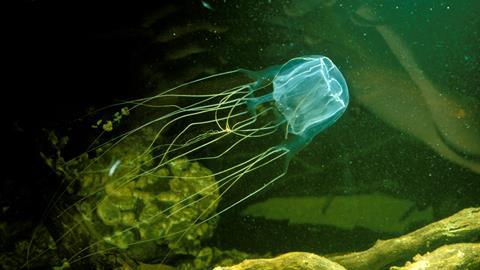 The latest insights into box jellyfish venom are helping to find new ways to treat the creature’s highly potent sting. Led by researchers in Australia, the team used Crispr gene-editing technology to identify genes involved in the envenoming process, opening up a range of possible new treatment targets.

Box jellyfish, Chironex fleckeri, are among the most venomous creatures in the world. Being stung by one is extremely painful and can even be deadly.

However, the exact molecular nature of C. fleckeri venom activity is still unknown, which severely limits development of new therapies. Traditionally, treatment has relied on an antivenom that is produced using sheep but none of the current treatments combat the pain or tissue necrosis associated with stings.

In order to better understand the venom and develop novel therapies, the team used a whole genome Crispr knock-out (GeCKO) screen. This systematically deactivates genes in mammalian cell lines to observe how the cells react to stimuli when those genes are no longer active. By testing the edited cells with C. fleckeri venom, the team were able to identify which genes are necessary for envenoming.

The GeCKO screen was then built upon with further genetic and pharmacological tests. The team found a range of pathways linked to venom activity, many of which could be targets for antivenoms. One promising target identified is a peripheral membrane protein responsible for calcium ion transport. The team found that the protein is necessary for cell death, and that disrupting it also disrupts venom activity.

The team then investigated whether the venom could be counteracted by two cyclodextrins, sugars that are known to reduce the level of cholesterol present in cell membranes. When they tested this approach in mice, they observed reduced pain and significantly reduced tissue death, although there was no effect on swelling. Cell death was even repressed up to 15 minutes after mice were stung.