In certain circumstances, sapphire nanowires grow by executing an unexpectedly frenetic dance, where oxygen atoms change between partners in vapour, liquid and solid phases. That dance has now been captured by Sang Ho Oh of Pohang University of Science and Technology (Postech)  in Korea. ’Our observations are the first of nanowire growth mechanisms at atomic scale in real time,’ Oh told Chemistry World.

To get such detailed images, Oh produced sapphire nanowires using a vapour-liquid-solid (VLS) nanowire growth technique directly on a transmission electron microscope’s ’hot  stage’. The stage contained a thin alpha-Al2O3 sapphire single crystal in an almost-complete vacuum, except for 10-6  Pa of oxygen. Heating the crystal above 660?C while irradiating it with a focused electron beam formed aluminium droplets, the final dance partner needed to begin nanowire growth.

VLS growth is common in nanowire production, and several groups have already observed it directly, Oh notes. ’The problem was resolution,’ he says. ’They can see nanowires grow under the liquid phase, but nothing more about how material is transported, and whether the interface between three phases - the triple junction - would be stationary or dynamic.’ 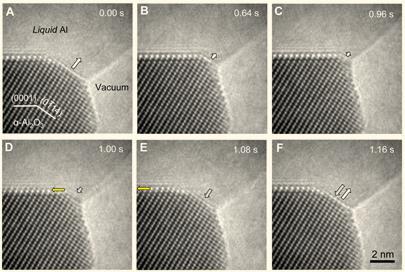 A sapphire nanowire’s oscillatory growth, adding material to a facet, until that facet disappears, when the added material dissolves in order to form a new atomic layer on top of the nanowire

Oh did observe the triple junction, and in certain circumstances recorded a two-steps forward, one-step back, oscillating growth. Here, liquid aluminium continuously transports oxygen from the vapour phase to feed the wire surface’s facets. Sapphire adds to these facets until they effectively disappear, as their neighbouring facets meet. Then, some of the recently-added material dissolves and moves to form atomic layers on top of the nanowire. This reveals the previously-disappeared facets again, restarting the dance.

Understanding these oscillations could help future nanowire applications, such as computer memory, Oh suggests. ’To control nanowire growth kinetics, to change orientation and control   diameter or length, or dope impurities into nanowires, we have to know the atomic scale growth mechanism,’ he says. ’Maybe these observations can give clues to nanowire growers, because before this they didn’t even know this kind of oscillation could exist.’

Takeshi Kasama, of the Center for Electron Nanoscopy at the Technical University of Denmark, who has also worked on characterising nanomaterials, calls the work ’a piece in the puzzle of understanding VLS nanowire growth.’

’The paper contains some interesting new dynamic observations and high quality images recorded at high temperature, which can eventually lead to a better understanding of a complicated process,’ he adds.