The UK government’s 2009 budget comes against the backdrop of the worst recession since the second world war, leaving Alistair Darling, the UK’s Chancellor of the Exchequer, very little room to manoeuvre without breaking the bank.

The Chancellor’s speech focused heavily on how he wants to produce a ’hi tech Britain that will lead our economic recovery’ although the speech only briefly mentioned the education system.

’The Government’s aspirations to produce a high tech Britain that will lead our economic recovery from the present recession sound wonderful, but they lack substance,’ said Dave Garner, president of the Royal Society of Chemistry (RSC). ’There is general agreement with the view often expressed by our Government that the UK must strive to be a leading science nation. However, this status depends upon sufficient investment in the UK’s research base and ensuring that sufficient scientific talent emerges from our schools and colleges.’

Despite financial restrictions leading the Chancellor to predict the country will need to borrow ?606 billion over the next four years, the government’s spending on science will be maintained. However, that investment will be directed towards those areas the government hopes will generate the biggest economic pay-back.

’Although the Budget provided additional support for key technology areas, the Chancellor has weakened the UK’s innovative potential in the future by meddling with the science budget,’ commented Nick Dusic, director of the Campaign for Science & Engineering in the UK.

’The Chancellor has undermined the independence of the research councils by making them re-allocate ?106 million of research funding towards areas with predicted economic potential. There needs to be an urgent review of this decision as it completely destroys the idea the research councils operate at arm’s length from government. Rather than boosting investment in the research base, like our international competitors, the government has moved money around.’ 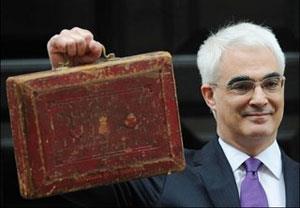 There was some good news for those companies that invest heavily on research and development as the budget contains a proposal to look at the UK tax system to see if changes are needed to encourage innovative industries like the pharmaceutical industry to locate their research and development in the UK. Any changes will be announced before the pre-budget report in November 2009.

’The announcement of this consultation demonstrates the commitment of the UK government to life sciences in Britain and represents an important first achievement for the Office for Life Sciences,’ says Richard Barker, director general of the Association of the British Pharmaceutical Industry. ’It could have significant impact on how companies make their investment decisions.’

There was more good news for ’innovative businesses’ in areas such as advanced manufacturing, digital and biotechnology as the government announced a ?750 million investment fund to provide financial support in the face of falling venture capital investment.

’The small and medium sized companies that make up the bioscience sector in the UK have been hit hard by the current financial crisis and we have highlighted the need for a high-tech investment fund,’ said Clive Dix, chairman of the UK’s BioIndustry Association. ’It is essential that the fund is now implemented rapidly.’

However, no specific aid was offered to the chemical industry - although new schemes to increase the number of cars being bought and houses being built should have a positive knock-on effect to the sector.

’I am afraid this Budget will be a major disappointment to chemical and pharmaceutical businesses across the UK,’ says Steve Elliott, Chief Executive of the Chemical Industries Association. ’I am particularly angry that existing money has not been redirected to help temporary lay-offs and short time working.

’In every major competitor country, businesses and workforces get support to help make sure skills are kept up to date with funds for training during short time working and layoffs.’

As promised in 2008 alongside the national budget, the Chancellor also published the world’s first green budget, which commits to reducing the country’s CO?2 emissions by 34 per cent by 2020. Among other measures, the budget included targets for off shore wind power and carbon capture and storage (CCS) commitments.

Those working on renewable energies will be pleased with the emphasis that the Chancellor placed on a ’sustainable’ recovery, with ?1.7 billion being set aside to ’develop and deploy new low-carbon technologies’ over the next three years.

’While the Chancellor’s announcement of a clutch of small-scale CCS pilot plants is a welcome step in that direction, how does this stack up against his promise of two billion more barrels of oil and gas from the newly-incentivised fields in the North Sea?’ asks Richard Pike, CEO of the RSC.

’The encouragement of new offshore carbon production has to be considered together with new CCS technologies. The importance of the link between them needs to be communicated far more effectively to the public and into the schools.’