Death from CCS leaks less likely than being struck by lightning

Any health risk associated with leaks from carbon capture and storage sites will be minor, according to a new study. The study, which estimates the risk based on deaths caused by leakage from natural CO2 seeps in Italy, concludes that dying of CO2  poisoning due to a leak would be less likely than being struck by lightning.

In the UK, the focus for carbon capture and storage (CCS) is largely on offshore sites, in old oil and gas fields beneath the North Sea. For landlocked countries, however, onshore storage may be the only option, making the safety of storage sites a concern. However, there is no data on health impacts from CCS leakage because only a handful of demonstration projects are so far underway. 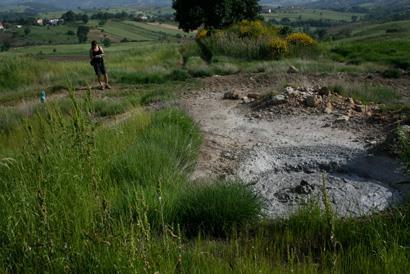 Mefitiniella Polla, a natural carbon dioxide seep in Italy. The seep has killed livestock but not people

Instead, Jennifer Roberts and colleagues at the University of Edinburgh, UK, turned to data from natural CO?2 seeps to try to estimate the potential risks of CCS. They gathered information on 286 seeps across Italy and Sicily and calculated the risk of death from CO2 poisoning for the 20 million people living near the sites. All the seeps were associated with natural underground CO2 reservoirs, volcanoes or aquifers and were leaking between 10 and 100 tonnes of CO2  per day. If these seeps were a CCS site this leakage would equate to less than 1 per cent per year at a site which was injecting in 3.6 million tonnes of CO2 annually. The researchers say this is reasonable under the Intergovernmental Panel on Climate Change’s suggested retention standards.

Based on the finding that in the last two decades only 11 people died at the seeps, the risk of death, over a year, is around 2.8 x 10-8 or 1 in 36 million. By comparison, the authors note, the risk of being struck by lightning is much higher, at around 1 in 43,000. ’It was a surprise to us,’ says Roberts. ’We weren’t really expecting to find values that were quite so low.’

What’s more, their estimate probably represents a worst case scenario. Although CO2 might leak in a similar way from a CCS site, models suggest the leakage rate would be lower than from natural stores. Perhaps more importantly, CCS sites would be subject to scrupulous monitoring, unlike the Italian sites. ’You’d be able to predict a leakage well before the CO2 got to the surface, so that when it actually reached the surface you could identify the leakage sites and put in loads of safety management procedures,’ Roberts says.

According to Jon Gluyas, chair of geo-energy and CCS at the University of Durham, UK, the study provides a useful, if slightly over cautious, baseline for estimating health risks associated with CCS. ’Overall the manmade sites will be much less prone to leak than the natural ones described in this paper and the manmade sites will be effectively monitored,’ he says. Gluyas suggests the greater problem will be winning over local communities, who may show resistance to ’anything buried beneath [their] feet’.