A new technique used to analyse samples from a meteorite that hit Australia more than 40 years ago could help scientists understand more about the chemical complexity of the early solar system. Calculations suggest the meteorite carried with it millions of different organic compounds.

The Murchison meteorite was spotted falling near the town of Murchison, Victoria in 1969. It’s an important reference for interstellar chemical diversity because pieces of the meteorite - which, it’s thought, could be older than the Sun - were retrieved soon after, meaning they remained largely unaltered by Earth’s atmosphere. 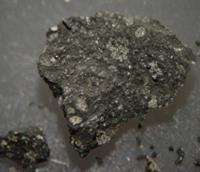 Sample from the Murchison meteorite

During the sixties and seventies, chemists used the most up-to-date methods of the time - such as gas chromatography mass spectrometry - to probe the meteorite, searching for specific groups of chemicals such as amino acids. But today, scientists are taking a more ’holistic’ approach. A team led by Philippe Schmitt-Kopplin at the Helmholtz Centre Munich in Germany has used ultra-high resolution mass spectrometry to analyse samples from the meteorite’s core.

The technique Schmitt-Kopplin’s group used is called Fourier transform ion cyclotron resonance/mass spectrometry (FTICR/MS) and allowed them to weigh thousands of different ionised molecules with the accuracy of the mass of an electron. Their analyses produced signals for over 14,000 different elemental compositions. According to their estimates, the meteorite must contain several million different organic compounds in total, hinting at the complexity of the early solar system.

Jonathan Watson, a geochemist at the Open University in the UK, says the information the researchers have gleaned only complements what is already known. But he does think the technique is promising. ’The difference is that you can actually look at the whole mass range and the whole chemical variety that’s in there,’ he says. ’Because it’s such a new technique, the significance of the findings will probably become more important later on, when other people start looking at the data they’ve produced.’

Schmitt-Kopplin points out that the study is actually record-breaking in terms of its resolution and the number of signals shown. ’People never demonstrated this diversity so far,’ he says. ’They were looking in a targeted way and saw, for example, more than 70 kinds of amino acids, so the diversity was high in this material, but no one ever looked in one shot like we did to show its complexity.’