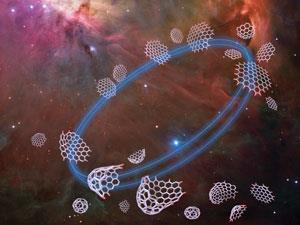 For over 20 years the infrared spectra of many astronomical objects have been interpreted as flat two-dimensional polycyclic aromatic hydrocarbons (PAHs) that are also thought to be the source of organic matter on our own planet. More recently the detection of molecules such as fullerenes – molecules composed entirely of carbon, including the spherical C60 – has revealed a more complicated picture of carbon in space. The links between these different molecules have been rather unclear but new research from Héctor Alvaro Galué at VU University of Amsterdam, in the Netherlands, has taken a fresh approach to this long-standing puzzle.

Building on laboratory experiments which have shown that two-dimensional graphene-like molecules can be turned into three-dimensional objects by the action of energetic particles, Alvaro Galué used theoretical models of these pathways to identify possible intermediate forms of the molecules. By modelling the infrared spectra of these different forms and comparing them to real astronomical data, he showed that this chemical transformation, known as fullerenisation, could be taking place in space and could explain the diversity of molecules that have been detected.

‘This evidence seems to support the hypothesis by reinforcing one of its most essential aspects, which is that the Unidentified InfraRed [UIR] emission phenomenon is the outcome of infrared fluorescence of molecular-like rather than solid amorphous carriers,’ says Alvaro Galué. ‘It’s the last piece in the puzzle of the enigmatic UIR emissions ubiquitous to most classes of astronomical objects.’

Xander Tielens, an interstellar medium expert at the Leiden Observatory in the Netherlands, believes this research shows much promise. ‘While the observed diversity may appear obfuscating, this work turns it into a positive tool, using the spectral characteristics of intermediary species to address a number of longstanding issues in the comparison between astronomical and molecular spectra.’