Diagnosing tumours in the nasopharynx without surgery

Detecting early-stage nasopharyngeal carcinomas via a non-invasive technique has been reported by scientists from Singapore. The method could improve the survival rates of patients, say the researchers.

Diagnosing nasopharyngeal carcinomas before they have become life-threatening is very difficult. Symptoms commonly occur once the disease has reached an advanced stage with five-year survival rates only around 34 per cent. Current diagnosis methods include lymph node biopsies or medical imaging techniques such as computed tomography and magnetic resonance imaging. 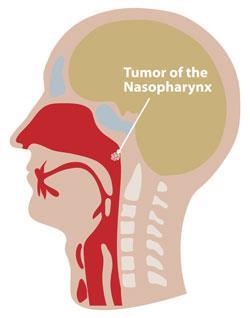 Now a team led by Bevin Lin, from the National University of Singapore, has developed a technique that uses a bifurcated fibre optic probe to collect nasopharyngeal tissue data. By combining ultraviolet auto fluorescence excitation-emission matrix (EEM) spectroscopy and parallel factor analysis calculations, they can then diagnose early-stage carcinomas.

Lin explains that healthy nasopharyngeal tissue auto fluorescence will look different from nasopharyngeal carcinoma auto fluorescence. ’An excitation-emission matrix is a simple way to visualise the tissue across many different wavelengths by creating a two dimensional map that illustrates the changing tissue characteristics,’ she says. ’This provides an immediate comparison between normal and nasopharyngeal carcinoma, since it is easy to see where the changes occur on the EEM map of the tissue.’

Removing the need for obtaining biopsies through surgery not only reduces the stress inflicted on patients, but also reduces medical costs. ’Early disease detection and a favourable prognosis go hand-in-hand.  Bringing optical histopathology into the clinic would have a huge impact for surgeons, pathologists and patients,’ Lin tells Chemistry World.

Thomas Wang, an expert in biomedical engineering from the University of Michigan, US, echoes Lin’s comments. ’This methodology can potentially be incorporated into medical endoscopes for real time surveillance in patients at increased risk of this form of cancer without the need for exogenous contrast agents or time-consuming tissue preparation.’