Did life get a kick out of interstellar nitrogen?

Organic compounds consisting of hydrogen, carbon and nitrogen are probably widespread throughout interstellar space, according to a team of Nasa scientists.

Organic compounds consisting of hydrogen, carbon and nitrogen are probably widespread throughout interstellar space, according to a team of Nasa scientists. The findings provide further support for the idea that life on Earth was kick-started by such compounds raining down on the planet. 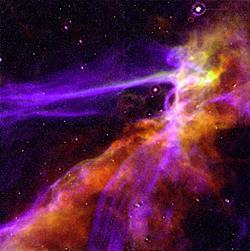 Astronomers have long suspected that interstellar space contains large quantities of polycyclic aromatic hydrocarbons (PAHs), based on the emission of infrared light at certain characteristic wavelengths. PAH is the collective name for a wide variety of hydrocarbons that consist of numerous connected rings. The interstellar versions are probably created by dying stars, but PAHs can also be produced by many combustion processes on Earth and are a common component of soot.

A team of astrochemists and astrophysicists from Nasa Ames research center in California wanted to discover the precise nature of the PAHs responsible for an infrared emission band at 6.2?m. They tested various different types of PAH, differing in size, structure and chemical composition, using a combination of laboratory experiments and computational studies and found that only molecules containing nitrogen atoms deep within their structure generated the correct emission band.

This finding has important implications for the fields of astrobiology and the origins of life because, unlike standard PAHs, nitrogen-containing PAHs, known as polycyclic aromatic nitrogen heterocycles, are commonly found in nature. ’Much of the chemistry of life, including DNA, requires organic molecules that contain nitrogen,’ said team member Louis Allamandola. Jon Evans