Copper and zinc in the diet could impair the action of statin drugs, compounds prescribed to lower cholesterol, say US scientists.

What started as a summer project in a lab at the University of Washington in Seattle led to an unexpected find. Douglas Fowler from Stanley Fields’ group came up with a project to study the effect of combining drugs with 52 metabolites on yeast cell growth. ’At the end of the summer, we hadn’t gathered much useful data, but I was convinced that the idea was a good one,’ says Fowler. ’We continued with the experiments and found an unexpected result - copper and zinc impaired statin effectiveness.’

Statins work by inhibiting an enzyme that’s responsible for cholesterol synthesis and are used to prevent heart disease. It’s known that metabolites - molecules that break down food to provide energy in a process called metabolism - in the body can interact with drugs, but understanding how these interactions happen could enhance drug performance and reduce side effects.

The team found that with lovastatin present, the metal ions had increased the level of proteins responsible for making ergosterol, a cholesterol analogue responsible for growth in yeast. They went on to test this in cultured mammalian cells too and got the same result with cholesterol. 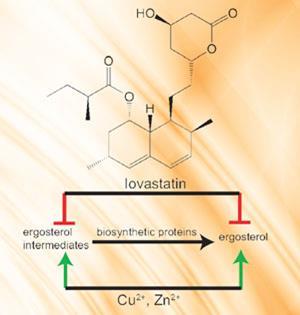 ’Cells contain thousands of metabolites,’ says Fowler. ’Severe effects can occur because of interactions between these metabolites and drugs, for example, combining antidepressants with food containing large amounts of tyramine - found in meats, cheese and red wine - can be deadly.’

Understanding drug-metabolite interactions may reveal metabolically dependent differences in a particular drug’s mechanism of action, which could have an enormous impact on personalising patient care, says Guri Giaever, an expert in gene function and gene pathways from the University of Toronto in Canada. ’There has been much discussion in the yeast community about how genetic background affects experimental results,’ she adds ’but it’s only recently that the contribution of a cell’s metabolic state has been considered.’

With the technology that’s available, one could easily scale up to several thousand metabolites, which would be a useful way to probe the function and toxicity of new drug candidates, concludes Fowler.