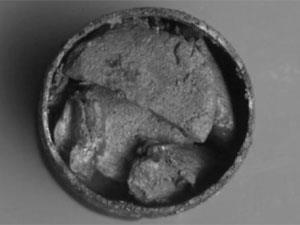 Some of the medicines we take today, such as aspirin, have a long history. But analysis of drugs found in an ancient shipwreck that sank in the second century BC threw up some compounds that are still being used by the medical profession today.

The Pozzino shipwreck lay off the coast of Tuscany in Italy, near to what was once the Etruscan harbour Populonia. For 2000 years the wreck and its contents remained undisturbed before being discovered in 1974 and excavated between 1989 and 1990. Some 20 years later, attention turned to what were probably the contents of a doctor’s chest, including numerous wooden and tin vials.

After x-raying one of these sealed tin containers and finding that it contained five large tablets, each about 4cm wide by 1cm thick, an Italian team took samples. The analysis has identified the organic and inorganic components – the formulation of this ancient drug – and perhaps its use.

According to Philip van der Eijk, a classicist who researches ancient medicine and science at Humboldt University in Germany, writers such as Galen, Dioscorides and Pliny the Elder ‘go into great detail spelling out the ingredients of compound medicines, the quantities of each ingredient, the mode of preparation and the mode of application’. However, he adds: ‘The chief difficulty for us when trying to recreate these recipes is the identification of the substances, as the ancient descriptions are not always sufficiently specific.’

Erika Ribechini, from the University of Pisa, one of the analytical chemists on the team, explains that spectroscopy identified zinc as the most abundant element at around 75% of the sample and that this was present as the mineral smithsonite (zinc carbonate) and hydrozincite (zinc hydroxycarbonate). ‘We know that ancient populations such as Etruscans and Romans knew about the medical properties of the zinc salts,’ she says. ‘It has been very exciting to be in contact with a rare, original, ancient therapeutic product and to have the opportunity to chemically discover its composition.’

In their medical recipes, Pliny the Elder and Dioscorides both describe how zinc compounds or calamina collected from the walls of copper furnaces were used to treat the eyes and dermatological complaints. The Latin calamina later became the name of the zinc ore calamine, a mix of smithsonite and zinc silicate, and later the zinc oxide containing pink lotion to soothe itching was named after it. But zinc compounds today are used for more than treating chickenpox.

These tablets could be a case of early polypharmacy

‘I was surprised by the presence of zinc compounds,’ adds Ribechini, ‘as they are still used for the treatment of dermatological and ophthalmic diseases.’ Zinc oxide, for example, is used in bandages and wound dressings to prevent microbial growth and zinc sulfate eye drops are used to reduce swelling.

Ribechini and the team suggest that the tablets weren’t supposed to be swallowed, but were instead intended to be suspended in water and used topically, perhaps as eye salves or collyria from the Greek, collyrion, meaning small loaves. ‘The term derives from the small “cakes” into which the ingredients were fashioned and dried for storage,’ explains David Leith, a classicist at the University of Cambridge, UK. ‘When ready to be applied, they were then ground down with a liquid, normally water or milk.’

However, Ralph Jackson, an expert in ancient eye medicines who works at the British Museum in London, cautions that the evidence is still a little thin to conclusively say that Pozzino tablets are intended for ocular use. For one thing, he says, collyria are usually stamped and shaped slightly differently.

For Jackson, the value in this work is that it builds up a database of the ingredients used in medicines. For example, the only previous analysis of these tablets focused on the biological components, but this research suggests that some of the plant based materials found in the earlier study could be there as a result of the beeswax used to bind the tablets, while the inorganic compounds were the medicinally important components.

However, says Jackson, these tablets could be a case of early ‘polypharmacy’ – using many active ingredients – and it would be foolish to assume that ancient medicines only had one or two active ingredients just because that’s how medicines are formulated today. For example, he says, the Italian team identify pine resin in the tablets and suggest that this was used to prevent microbial degradation. However, pine resin is itself an antiseptic and is mentioned in a lot of ancient texts.

To date the team has only analysed the contents of a single tin container. Jackson says this is just the ‘tip of the iceberg’ of finds from the Pozinno shipwreck. A fuller survey of the wreck's contents could turn up more medicines.