US researchers have synthesised a supramolecular host system that provides novel selective recognition of two different guest molecule types without cross-over or interference.

Julius Rebek’s group at the Scripps Research Institute in La Jolla, California, were inspired by biological systems featuring separate binding compartments connected by a means of intercommunication. ’Any allosteric enzyme has two binding sites with conformational changes transmitting the communication between them,’ explains Rebek. ’On a larger, organelle level, proton pumps communicate between Golgi bodies and mitochondria.’

To replicate these systems, Rebek’s team attached two hemispheric binding sites with a long, straight, chain using a copper-catalysed azide-alkyne cycloaddition click reaction. One binding site is a deep ’cavitand’ that accommodates compact adamantane derivative guests by itself. The other site is shallower, and traps its longer chain hydrocarbon guests in collaboration with a second molecule, dimerising to form a symmetrical capsule. 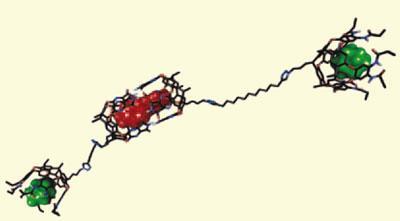 The host molecule forms an assembly that in the presence of two different guest molecule types, selectively binds one type at a capsule binding site in the middle, and the other in the cavitands at each end

In previous experiments, the Scripps scientists had attempted to confine molecules in two different capsules, but hybrid capsule structures formed, frustrating their desire for selectivity. Now, NMR spectroscopy confirmed that adding suitable guests forms a unique supramolecular assembly containing two of their latest host molecules, two adamantane derivatives, and one longer hydrocarbon. The key to achieving this, Rebek explains, is using hydrogen bond donors and acceptors that are spaced differently in the two binding sites. His team also tested the assembly’s binding selectivity, or orthogonality, releasing guests in one binding site by displacing them with better-fitting molecules without displacing the guests in the other site. This could be done in both the cavitand and the capsule.

Rebek hopes that the system can be used in signalling or sensing applications. To achieve this, his group’s next step is establishing a means of communication between the compartments. One possible approach is to introduce fluorescence resonance energy transfer, where an electronically excited fluorescent donor molecule transfers its excitation energy to an acceptor molecule.

However, Harry Anderson, a University of Oxford, UK, chemist who exploits macromolecules in molecular engineering, underlines that the highly selective recognition the team achieves is useful by itself. ’The search for orthogonality is a common theme in chemistry, because it leads to controllability,’ notes Anderson. ’Their capsule can be extended and made to burst open like a ripe seed-pod, then reassemble, just by adding different guests, without interfering with the binding state of an appended cup-like cavitand. The level of controllability is delightful.’