US researchers have invented a better way to stimulate or block nerve impulses by coating an electrode with a membrane that can control the local concentration of ions. This could lead to low power, compact devices that could help patients cope with conditions such as paralysis, epilepsy and chronic pain. 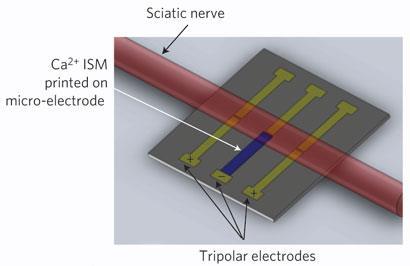 Calcium ions control the gates that allow other ions to shuttle in and out of nerve cells when an action potential fires. Ordinarily, the neuron is more negative than the surrounding fluid, and the action potential is the cell discharging the electrical energy by letting positive ions in. Calcium helps to keep these gates shut, so a reduction in the calcium near the nerve cell should make it easier to excite an action potential.

This is what the team, led by Samuel Lin of Harvard Medical School and Jongyoon Han of the Massachusetts Institute of Technology, found when they tested a calcium-absorbing membrane on an electrode which was used to stimulate the sciatic nerve of a frog. By giving the membrane a minute to absorb calcium ions near the nerve, they could reduce the minimum current needed for the neuron to fire by more than 60 per cent.

To make the calcium-absorbing membrane, the team mixed calcium ionophore II with a polymer, using capillary force to draw it into a microfluidic channel on one of the gold microelectrodes. Depending on the direction of the current across the electrode, the ionophore either absorbs or releases calcium ions. Peter Kj?ll at the Swedish Medical Science Centre in Stockholm points out that this is a simple enhancement to electrodes already in use for nerve stimulation and blocking.

After firing an action potential, a cell must restore the voltage across its membrane before it can fire again. Nerve-blocking electrodes prevent recovery by running a current across the nerve. This current is higher than the stimulating current, so a calcium-absorbing membrane attached to a blocking electrode depletes the calcium further. Rather than making the ion gates easier to open, the gates don’t quite shut. This scuppers the cell’s efforts to recreate the voltage by pumping ions in and out, says co-author Yong-Ak Song. The team achieved the same level of blocking using 25-50 per cent less current, and they also created partial blocks, which allow the nerve to fire at reduced strength.

’The reduction in the amount of current is always a benefit when it comes to prosthetic devices,’ says Kj?ll. Effective neuro-prosthetics must stimulate or block a very specific area, and lower currents make it easier to target smaller regions, he adds.

The team is hopeful that their ion membranes could improve experimental treatments for epilepsy and Parkinson’s disease using deep brain stimulation, as well as functional electrical stimulation to help reactivate paralysed limbs. ’It sounds like science fiction, but many patients right now are undergoing clinical trials, benefiting from these technologies,’ says Han.