Dispersant use not 'unreasonable', despite lack of data

US government was ill prepared for the use of dispersants following the Deepwater Horizon spill but did not act unreasonably, report finds

The US government was not adequately prepared when it made the controversial decision to use chemical dispersants in the wake of the Deepwater Horizon oil spill, according to a report from federal officials.

Despite this, the preliminary findings from the National Commission on the BP Deepwater Horizon Oil Spill and Offshore Drilling say that in the context of lacking necessary scientific information, the authorities acted reasonably in their response to the spill.

The commission is investigating the causes of the oil spill and ways to prevent or better address future spills. The 6 October staff report will be now considered by the panel, which will issue a final report in January. 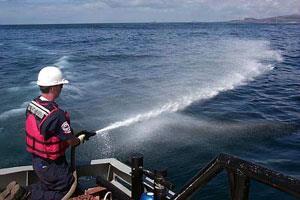 1.84 million gallons of dispersant chemicals were applied during the oil spill

Dispersants are blends of surfactants and solvents designed to prevent oil slicks by breaking up the oil. Some 1.84 million gallons were used during the Deepwater Horizon spill, according to the report - 771,000 gallons of which   were applied at the well-head, almost a mile below the surface. The Deep Horizon spill marked the first time dispersants had been used near the sea floor in this way.

Deploying the dispersants at depth appears to have made it safer for responders in the immediate vicinity of the spill by reducing the volume and concentration of oil that reached the surface, according to the report. Toxicity tests by the US Environmental Protection Agency (EPA), while still preliminary, have not revealed major problems.

’Skimming up the oil should always be the first and best option,’ says environmental chemist Ed Overton, at Louisiana State University, US. ’But the dispersant decision was the right one,’ he says. ’Ten thousand miles of shoreline could have been impacted. Instead, only 600 miles were. That means that the dispersant did a good job. We don’t know the full impact at depth but so far it really looks good,’ he adds.

The report criticises the EPA as unprepared for the possibility that massive volumes of dispersants could be required to break up the oil, and the National Oceanic and Atmospheric Administration (NOAA) for not having generated the necessary scientific data on the impact of dispersant use on a large scale.

The EPA did not respond to requests for comment on the report, but when EPA administrator Lisa Jackson appeared before the commission in late September she described the decision to allow subsea disperant use as ’one of my toughest decisions to date. My wish is that no one have to make the same risk management decision with the same science.’