A panel of engineered enzymes can selectively oxidise a series of cyclic amines to form high-value pharmaceutical building blocks. The team used molecular dynamics studies to guide the enzyme evolution process and integrated this strategy into a concise drug synthesis.

Cyclic amines are a valuable motif in many pharmaceutical compounds and appear in around 60% of small-molecule drugs. There is consequently a huge demand for functionalised amines, but the inertness of C–H bonds makes the preparation of these fragments particularly challenging. ‘Without any other functional groups within these molecules, all of the chemistry happens at either the nitrogen atom or the adjacent C–H bonds,’ explains Jeremy Robertson, a synthetic organic chemist at the University of Oxford, UK. ‘We can’t normally access the other positions with chemical reagents.’

To address this gap in the synthetic toolkit, Robertson, and bioinorganic chemist Luet Wong, also at Oxford, have developed a library of evolved cytochrome P450 enzymes, capable of selectively functionalising cyclic amines in any position. This superfamily of iron-containing enzymes is able to install hydroxyl groups into C–H bonds with molecular oxygen and uses a complex folded protein to surround the reactive iron centre and position the substrate for reaction. Careful bioengineering can change the shape of this active site, forcing the substrate into a different position and leading to the formation of different products. 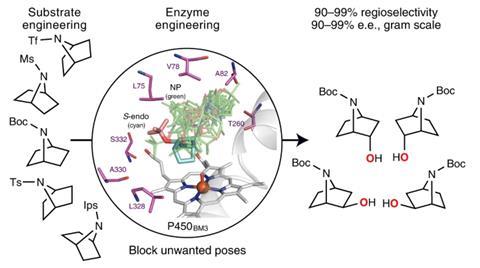 The team screened various cyclic amines against a panel of mutated P450 enzymes and modelled the binding of the substrate within the active site using molecular dynamics. ‘We wanted to understand what interactions are involved in holding the substrate in one particular orientation,’ explains Wong. ‘We then tried to disfavour any other orientations which would lead to unwanted products.’ Guided by these computations, the group introduced mutations which blocked unproductive reactions, allowing them to systematically tailor the performance of individual enzymes. ‘After several iterations we can get some really striking changes and target a single desired compound,’ comments Wong. The final panel of 48 enzymes successfully oxidised all the challenging C–H bonds in four different cyclic amines, creating a library of high-value pharmaceutical building blocks.

‘This is a significant step forward in directed evolution of P450 enzymes as sustainable catalysts in organic and pharmaceutical chemistry,’ says Manfred Reetz, a biocatalysis researcher from the Max Planck Institute for Coal Research in Germany. ‘They’ve achieved selective hydroxylations at unactivated carbon positions with excellent results.’

Using this enzyme panel, Robertson and Wong then applied this strategy to a real drug synthesis and prepared the circulatory medication anisodamine in a streamlined six-step process. ‘It’s a wonderful example of organic and enzymatic groups joining efforts,’ says Reetz. ‘It contributes to popularising enzymes in the chemical community.’

The team is now investigating other small molecule substrates and improving the functional group diversity of their existing fragment library. But both Robertson and Wong are eager to develop the P450 enzymes as a general tool for synthesis. ‘Ultimately, we would like to get to the point where we could really embed this chemistry in synthetic strategy,’ says Robertson. ‘We hope people will automatically consider these reactions when making retrosynthetic disconnections.’