A team of scientists from the US have developed a simple system that will allow people to test their blood cholesterol levels at home, using a smartphone.

David Erickson and co-workers from Cornell University in New York may have developed just that. Their system consists of a small accessory device that attaches onto a smartphone, an app, and dry reagent test strips for measuring blood cholesterol levels that are already commercially available. A drop of blood is placed onto the test strip and an enzymatic, colorimetric reaction occurs. This strip is then placed into the accessory device and an image of the strip is generated using the camera on the phone. The app then quantifies the colour change and converts this into a blood cholesterol concentration using a calibration curve. 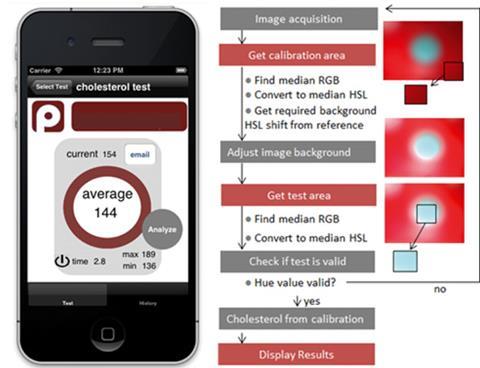 The achievement of Erickson and his colleagues should not be understated. Although what they have done may sound simple, developing a smartphone-based system that enables precise and reproducible diagnostic measurements to be taken is actually very difficult. The largest challenge comes from having to account for different lighting conditions and reaction times, differences between the cameras and camera settings in different types of phone, and the potential for misalignment of the test strip. The team overcame the lighting problem by using the accessory device to block out external light so that the test strip would be uniformly illuminated by the flash on the camera. Meanwhile, algorithms in the app account for the other potential variables.

‘This work is another excellent demonstration of cellphone-based sensing,’ says Aydogan Ozcan, a point-of-care diagnostics expert at the University of California in Los Angeles, US. Ozcan himself has developed numerous smartphone-based systems and he sees the value in this work: ‘it will provide numerous opportunities, especially for home monitoring and testing of chronic and elderly patients.’

Erickson and co-workers are now working to commercialise their system, so it may be available for the general public to purchase in the near future.