DNA hydrogel has a long memory

Metamaterial collapses out of water and behaves like a liquid, but pop it back in water and up it springs just like before 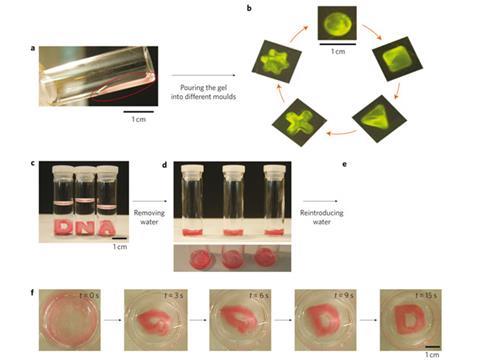 The gel can flow freely as a liquid until poured back into water, where it reforms its original shape

It might look like a pink gloopy liquid to begin with but when you pour Dan Lou's DNA hydrogel into water it spontaneously reforms into its original shape. Even the Cornell researchers aren't exactly sure why their new material does what it does, but the potential applications are causing excitement.

The hydrogels are made from incredibly long strands of DNA that tangle up, trapping water in its structure. The researchers think that once the hydrogels are taken out of water they collapse under their own weight. Returning water to the gels gives them extra buoyancy allowing them to spring back into shape. Lou's team has already shown that this can be used to switch off an electric current – adding water to cause the hydrogel to change its shape, breaking a circuit. Drug delivery is another obvious potential application but who knows where this goo will end up, and what it will spring into when it gets there (if it's wet).