US researchers have found a way to scale up DNA origami into larger structures by using ’tiles’ instead of ’staples’ to pin them in place. Scaling up is crucial for the further development of DNA origami, which has great potential in providing cheap access to complicated nanostructures.

Originally developed by Paul Rothemund at the  California Institute of Technology, US, DNA origami is made from long strands of viral DNA. To fold it up, small pieces of ’helper’ DNA are used - which are pre-coded to interact, (via  Watson-Crick base pairing), at specific points on the strand. These can be configured to weave the DNA strand back and forth, generating a pattern.

’One of the practical limitations of DNA origami has been the size,’ Rothemund told Chemistry World. ’We have been limited to 2D structures roughly 100nm in size, due to the length of the scaffold strand that is used. The reason for this is because it is difficult to get long single-stranded scaffolds longer than around 7000-8000 nucleotides, inexpensively and in high yield.’

Now, Hao Yan and Yan Liu at Arizona State University have developed a way to make DNA origami four times the size of that achieved using the Rothemund technique. Instead of using many short DNA strands to pin together the DNA, the team instead used square tiles - each of which was also made from DNA origami. As proof of the concept, the team produced ’bricks’ consisting of 5x5 and 7x8 arrangements of tiles, reaching up to 200nm in size. 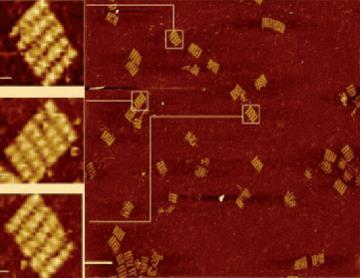 ’Whatever size we can achieve with the basic technique, Yan and Liu’s technique seems likely to buy us an extra factor of scale,’ Rothemund says. ’Importantly, this increase in size should bring us into the range of state of the art optical lithography, which will allow us to start enabling the use of this process.’

William Shih, who works on DNA origami at Harvard University, US, is also impressed by the work. ’I think this is a terrific idea, and I’m confident that such a hierarchical templating approach will play a key role in allowing us to build increasingly complex devices on the nanoscale,’ he says. ’One application might possibly be a nano-breadboard for assembling nanoscale circuits.’