DNA origami with a twist

Researchers in the US have designed and synthesised a nanoscale M?bius strip out of DNA origami.

A M?bius strip is a closed system with only one edge - one can be made by taking a strip of paper and giving it a half twist, then joining the two ends to form a loop. These kinds of structures are often found in nature, but making them via molecular engineering is a difficult process.

However, Hao Yan and Yan Liu and colleagues from Arizona State University were able to design a M?bius strip  that could be made in just one single step using DNA origami. The technique involves taking one long piece of single stranded DNA, and ’stapling’ it into the desired structure with shorter DNA lengths.

The team’s M?bius strip is formed of 11 parallel DNA helices, joined together by strands crossing from one helix to another.   ’It’s a one part reaction,’ says Yan, ’because we have a scaffold strand, which is 7249 nucleotides long, and then just added small helper staple strands to fold it into a M?bius strip. Because of the design of the folding path, the staple strands pair off with the scaffold and naturally fold into this structure.’ 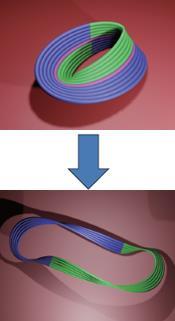 DNA kirigami to change the topology of the M?bius strip

Following their initial synthesis Yan and Liu then cut the M?bius strip, using a technique they call DNA ’kirigami’ - a Japanese variation of origami. ’The idea of kirigami is to reconfigure the topology into a different structure,’ says Yan. For this the team replaced some of the staple strands with ’toe hold’ strands, which have unpaired single-stranded tails. This allowed them to ’displace’ the toe hold strands, simply by adding complementary DNA which could bind to the whole length of the toe length staples.

Using the kirigami technique, Yan and Liu cut along the length of the M?bius strip in two different places, creating new topologies. For example, cutting along the centre of the strip resulted in a larger single loop containing two full twists. They also cut a third along the width of the original structure to create two interlocking rings. ’This gives us a totally new way to create topology and recreate topology without breaking the covalent linkage,’ says Yan.

’A decade ago it would have been unthinkable that we would have a molecular analogue of paper that so easily made into a M?bius strip, or have a such close analogue of cutting,’ says Paul Rothemund, of the California Institute of Technology, US, the creator of DNA origami. ’This work really stands out as a "mathematico-molecular delight" a celebration of what we humans have come to understand and to create.’

The team now hopes to create more complex topology, such as knotted structures, using the technique. They hope that in the future these structures could be used in molecular machines.